Chavez Jr. officially announced his return on Wednesday for December 10th, when he takes on Germany's Dominik Britsch (32-2-1, 11 KO) at the Arena Monterrey. The fight will be carried by TV Azteca and promoted by Zanfer Promotions.

Chavez's next fight is at 168-pounds. Canelo has dropped back to 154-pounds, where he captured the WBO junior middleweight crown in September with a knockout victory of Liam Smith. 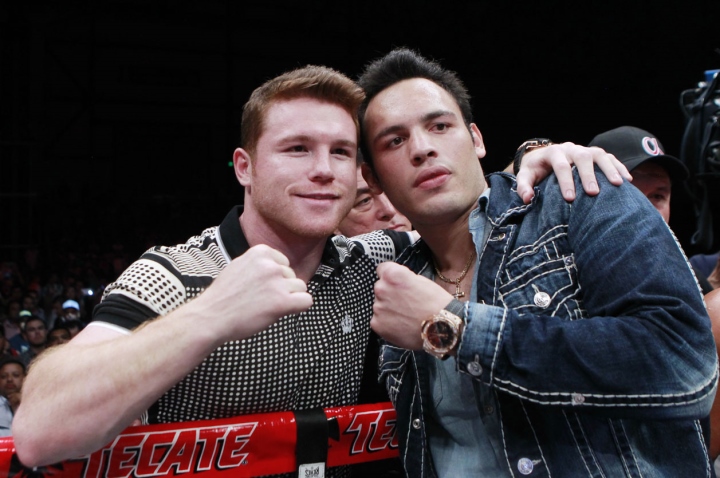 Canelo is planning to move up to the middleweight division for his next fight. Chavez is willing to drop down to a catch-weight of 164-pounds - if Canelo is willing to make the fight for 2017.

A fight between the two of them has been discussed for a very long time, but they were always separated by one or two weight divisions. The upcoming contest will be Chavez's first fight since last July's victory over Marcos Reyes. Chavez suffered a bad hand injury in that fight and underwent surgery. Coincidentally, Canelo is recovering from a hand injury that he suffered in the win over Smith.

"It would be a fight that is totally for the people, for the Mexican public. I imagine they want to see [this fight]. I do not know if there's a lot of interest, but I think it can be attractive. And the weight we would have to negotiate - the promoters, managers. We would have to work out a weight where I would be able to climb in there and put on a good fight. I can give Canelo [a catch-weight of] 164 pounds," Chavez Jr. told ESPN Deportes.

"I can not say that much about him. I think he's a good fighter. I have admiration for him, but he has not fought with the opponents that people wanted him to fight, and because of that he lost some of those people who were there when he started because he comes from the bottom."

Now here's where it gets fun...Canelo has twice as many fights as GGG and walks around about 10 pounds heavier than him. His promoters want GGG to move up to fight Ward, yet I guarantee that Canelo wouldn't fight Chavez…

How much does Chavez weigh right now? Has to be 200+. Who is this guy kidding?

Canelo doesn't want that, would be great though. Chavez Jr would probably give him trouble just because his size.