Julian Williams never took his eyes off of Jeison Rosario, even as Rosario turned away from him as they stood on stage Friday afternoon.

Williams wants anyone wondering if he has taken this big underdog at all lightly to know that he hasn’t taken his focus off the task at hand Saturday night. Just before their stare-down, the heavily favored Williams and the largely unknown Rosario both made weight for their 12-round, 154-pound title fight Saturday night at Temple University’s Liacouras Center in Williams’ hometown of Philadelphia. 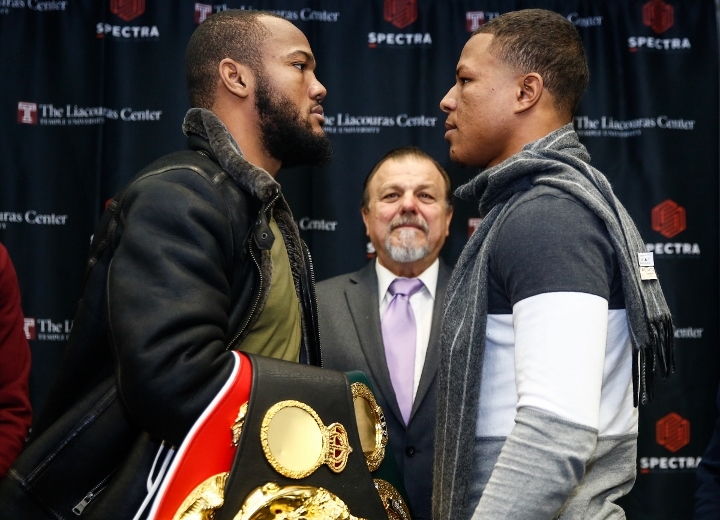 Williams, 29, will make the first defenses of the IBF, IBO and WBA 154-pound championships he won from Jarrett Hurd in his last fight. Hurd was a 6-1 favorite, but Williams knocked down Hurd in the second round, out-worked him throughout their bout and won a 12-round unanimous decision May 11 at EagleBank Arena in Fairfax, Virginia.

The Dominican Republic’s Rosario, 24, is 7-0-1 in his eight fights since Nathaniel Gallimore stopped him in the sixth round of their April 2017 bout in Las Vegas.

FOX will televise Williams-Rosario as the main event of a tripleheader scheduled to begin at 8 p.m. ET/5 p.m. PT.

Earlier Friday afternoon, Chris Colbert and Jezreel Corrales made weight for their 12-round, 130-pound championship match on the Williams-Rosario undercard.

Also Friday, Joey Spencer weighed in at 155¾ pounds for his six-round fight against Erik Spring, who came in at 155 pounds even. The bout between Spencer (9-0, 7 KOs), of Linden, Michigan, and Spring (13-3-2, 1 KO), of nearby Reading, Pennsylvania, will open FOX’s telecast.

Putting a little sum on a 1st round knockout for Williams.