Adam Lopez saw his stock soar in defeat, even more so with many observers coming to his aid as the victim of a quick stoppage versus Oscar Valdez.

Still, a defeat was where the valiant late replacement was heading even if he survived the seventh round of their ESPN+ main event Saturday evening in Las Vegas, Nevada.

A bout that was scraped together on barely a day’s notice turned out to be an upgrade from the original, with Lopez giving the former featherweight titlist all sorts of hell in their scheduled 10-round junior lightweight affair. 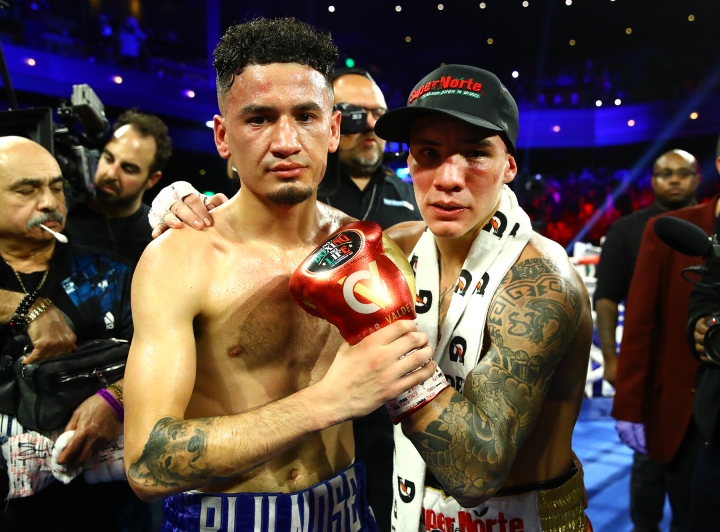 Valdez was head on two scorecards at the time the of the stoppage, leading by scores of 57-56 on the card of Connecticut’s Glenn Feldman and an absurd 58-55 in the eyes of Nevada’s Dave ‘Not Carl’ Moretti. Californa’s Max DeLuca offered the dissenting tally of 57-56 in favor of Lopez, who floored Valdez in round two but was dropped himself and eventually stopped at 2:53 of round seven.

All three judges agreed on the scoring in the first four rounds, with the 1st, 3rd and 4th all awarded to Mexico’s Valdez (27-0, 21KOs), while Califoria’s Lopez was awarded a clear-cut 10-8 round for the 2nd, in which he sent Valdez crashing to the deck courtesy of a 45° hookercut on the inside.

Rounds five and six provided the disparity in the three cards.

Judges Feldman and DeLuca both had Lopez winning round five, while DeLuca also awarded the 6th in favor of the featherweight prospect, who accepted the fight on Friday in place of Andres Gutierrez who missed the 130-pound weight limit by 11 pounds.

Lopez’s post-knockdown efforts didn’t at all resonate with Moretti, who only saw the 23-year old win just the second round.

The scoring became a moot point in round seven, although it began an entirely new discussion. Lopez was floored by a right hand, but managed to beat the count. He also thought that he would hear the bell to end the round, but a late rush by Valdez was enough to convince referee Russell Mora to hit the panic button and wave off the contest with just seven seconds to go in the frame.

Even if Lopez survived the round, it still would’ve been scored 10-8 for Valdez and, thus, mathematically putting the fight out of reach. Lopez would have trailed by five points on Moretti’s card and three in the eyes of Feldman, both clearing the path for an eventual Valdez win with just three rounds to go. He also would have fallen behind by two points on DeLuca’s scorecard.

Valdez is now being groomed for a shot at countryman and long reigning 130-pound titlist Miguel Berchelt, for some time in 2020.

I only had Valdez winning round 1

[QUOTE=Jab jab boom;20222977]you did leave out that Lopez had to jump up a full weight class on 24 hrs notice. He was up against it way more than Valdez was. I've seen fighters take yrs to move up a weight…

glenn feldman won a trip to saudi arabia for his allegiance

[QUOTE=ShoulderRoll;20223548]I hope a "Judging the Judges" column becomes a regular feature on BoxingScene. But I bet promoters would exert pressure for it not to become a regular feature. Dave Moretti looks suspect based on that scorecard.[/QUOTE] I always wanted someone…