Once upon a time, Dr. Lou Moret held the distinction as a top shelf ring official.

Those days are long gone, as well as his ability to properly score a high-profile fight.

Yordenis Ugas should never have to look back on his ring record and explain why he was forced to settle for a split decision win in one of the best performances of his career to date. Such a fate is what he has to accept, though, as the 2008 Olympic Bronze medalist for Cuba had to sweat out a 12-round victory over Abel Ramos atop a special Sunday edition of Premier Boxing Champions (PBC) on Fox.

Judges Zachary Young and Edward Hernandez both scored the contest 115-113 in favor of Ugas, tallies that still seemed too close. Still, they are far more digestible than the 117-111 scorecard submitted by Moret in favor of Ramos in Sunday’s main event live from Microsoft Theater in Los Angeles. 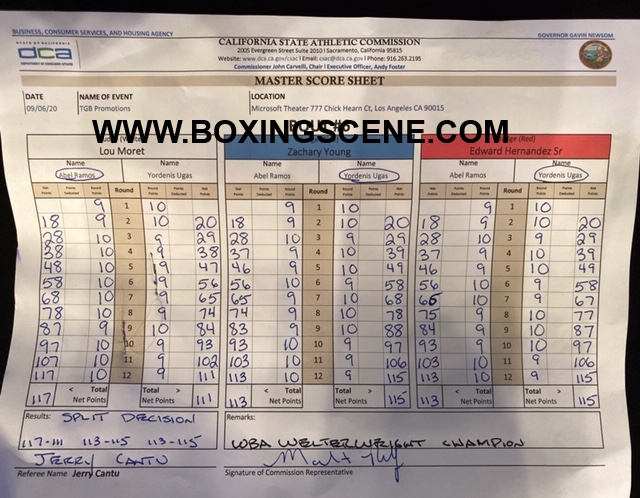 Amazingly, the three judges were unanimous in seven of the 12 rounds. All three ringside officials had Ugas sweeping rounds one, two and nine, while awarding rounds three, six, eleven and twelve in favor of Ramos. Rounds three and twelve saw Ramos land power shots which clearly buckled Ugas.

Following the clean sweep in the opening two rounds, Ugas would win just one more—round nine—on the card of Moret who favored Ramos’ singular moments of success in the majority of the rounds to that of Ugas’ jab-heavy offensive output.

Just because judges Young and Hernandez had the right boxer winning does not mean they are completely off the hook. Still, the two generally saw the same fight as they agreed on ten of the twelve rounds scored. The only two rounds on which they differed were rounds seven and ten.

Young and Moret agreed on eight rounds. The four rounds on which they differed—rounds four, five, seven and eight—were frames were Moret scored all for Ramos while Young ruled in favor of Ugas.

Moret and Hernandez were also in lock step on eight of the ten rounds. Once again, all of the rounds on which they did not see eye-to-eye—rounds four, five, eight and ten—went to Ramos on Moret’s card.

None of the three judges had more than three rounds where they were in the minority.

Moret was the lone judge to award rounds four, five and eight in favor of Ramos.

Young cast the dissenting score in just one round, with Ugas taking round seven on his card while Moret and Hernandez had Ramos winning the frame.

Hernandez was on his own only for round ten, scoring in favor of Ugas whereas it served as the starting point for a three-round sweep on the respective scorecards of Young and Moret.

Sunday’s main event marks at least the third time this summer where Moret turned in a scorecard that warrants at least an explanation in front of a panel interested in any sort of reform. The 75-year old official was part of the August 8 return of PBC on Fox, where he had unbeaten junior middleweight David Morrell pitching a 12-round shutout over Lennox Allen, as well as awarding a landslide win (97-92) in favor of Lucas Santamaria over Mykal Fox in a bout most observers felt was much closer.

And then we ask why is boxing going to the chits Moret should be fired like so many other judges Whether they are incompetent or just done , please bring us some new judges The sport will only take two…

There needs to be a change in judges scoring. I've said this before. There should be a judging consensus of ex-fighters, trainers, and esteemed boxing journalists, who are scattered throughout the crowd. Technology has evolved to a point, where they…

I legit want to be a professional boxing judge it sounds too easy. Can’t be that hard right? You don’t even need to pay attention apparently.