Lucas Santamaria and Mykal Fox delivered a terrific fight for home viewers, with their performances far exceeding that of the three judges assigned to their bout.

A hard-fought battle between aspiring welterweights saw Santamaria claim a 10-round unanimous decision win Saturday evening at Microsoft Theater in Los Angeles. The FS1-televised main event played well with home viewers, who witnessed a close fight with the possibility of an opening round knockdown providing the margin of victory for Santamaria.

Instead it became the start of what was somehow viewed as a wide win. 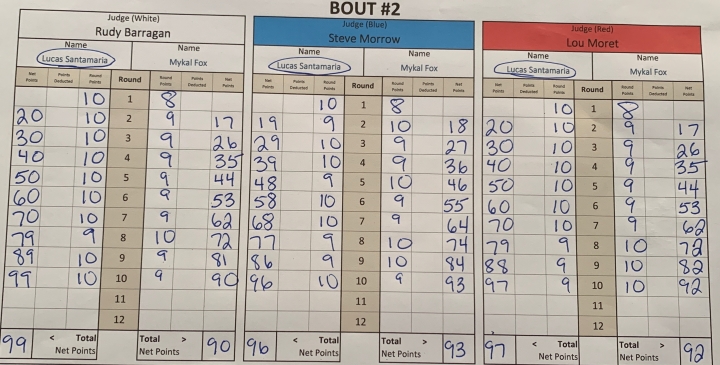 Judge Steve Morrow had it the closest of the bunch, scoring the contest 96-93. Dr. Lou Moret was one round wider at 97-90, while Rudy Barragan’s tally of 99-90 was flat out disrespectful to what took place in the ring.

The opening round was a given for Santamaria, who floored Fox (22-2, 15KOs) for the first time in his career courtesy of a left hook. From there it became a struggle for the ringside officials, all of whom hail from California. Interestingly, they agreed on six of the 10 rounds scored—five of which (rounds 1, 3, 4, 6, 7) were awarded to Santamaria while Fox pulled a clean sweep in round eight.

Judges Barragan and Moret were in sync on eight of the 10 rounds scored, which explains why their cards were a mess. Santamaria—a 22-year old prospect from Garden Grove, California—claimed rounds one through seven on both cards, while both judges had Fox winning round eight.

The 75-year old Moret—a former veteran referee before sticking strictly with judging—had Fox winning the final three rounds on his scorecard. Round eight was the only round awarded to Fox on the card of Barragan.

Judge Morrow’s card was the closest to being in line with home viewers. The 20-year ring official from Hollister, California was the lone judge to award Fox rounds two and five, though taking the fight off of the table for the Hyattsville, Maryland welterweight by round seven, at which point he had Santamaria ahead by four points with just three rounds to go.

Morrow agreed with the other two officials on seven rounds apiece. Morrow and Barragan were in sync for the six aforementioned common rounds, along with both awarding Santamaria the 10th and final round. Moret and Morrow both scored round nine for Fox, while Barragan saw Santamaria taking the frame.

The same officiating team all worked the opening televised bout of the evening, in which Dave Morrell Jr. outpointed Lennox Allen over 12 rounds in an interim title fight which aired live on Fox prime. Morrell won the super middleweight contest by scores of 118-110 (Morrow), 119-109 (Barragan) and 120-108 (Moret), with the shutout bid from Moret somewhat of an eye-opener—though paling in comparison to what took place in the FS1 headliner.

One judge had it for Santamaría all rounds innit? I should watch this fight. I did see highlights on Instagram. I think PBC’s wallpaper of fake blurred people affected the scorecards. Ghetto ass production.