The unpleasant news broke on Saturday night, that WBO super bantamweight world champion Jessie Magdaleno (25-0, 18 KOs) will no longer be featured next month on ESPN.

The boxer suffered a hand injury in training camp, and that has forced him to withdraw from a scheduled mandatory title defense against Cesar Juarez (20-5, 15 KOs) of Mexico.

The fight was going to take place as part of an ESPN televised tripleheader on November 11 in Fresno, California. 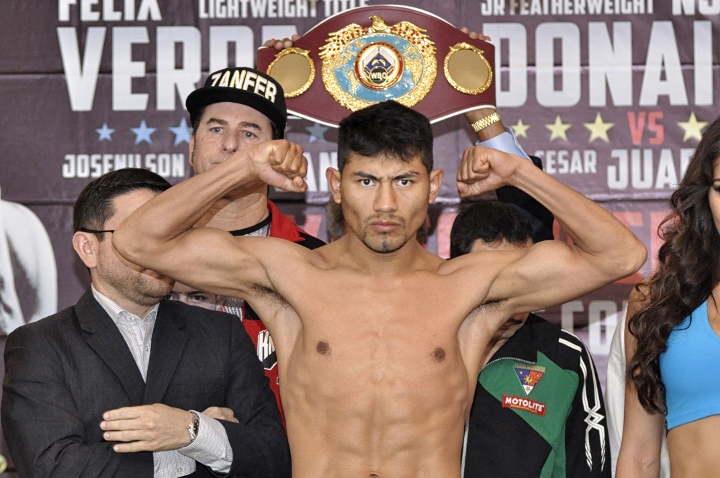 The event will still move forward with the two remaining bouts. There is no word is a third will be added.

The main event, at the 16,000-seat Save Mart Center, will feature a battle of undefeated junior welterweight contenders, with hometown hero Jose Ramirez (20-0, 15 KOs) taking on Mike Reed (23-0, 12 KOs). There is also a high stakes light heavyweight showdown for the vacant International Boxing Federation championship - when Artur Beterbiev (11-0, 11 KOs)collides with Enrico Koelling (23-1, 6 KOs) in the co-main event.

The news of Magdanelo's injury did not sit very well with Juarez, who received a phone call over the weekend - advising him that Magdaleno suffered a wrist injury.

"From the moment I had my fight with Filipino Albert Pagara (Caesar knocked him out in July 2016), I received the number one ranking in the world inside the WBO. It is well known that Jessie Magdaleno stay away from facing me in a championship fight. It seems outrageous to me that at this point, and only a few weeks before the fight, that the champion has been injured, which is very dubious and as a result he avoids the fight that was also his mandatory - and he's also dared to disobey the rules of the WBO," Juarez said.

"Magdaleno is said to be world champion and he avoids strong boxers like me. My question is, does Jessie Magdaleno really deserve to have the world championship, when he's been changing dates and now canceling the fight? It seems to me that he has a lack of respect towards the World Boxing Organization, towards my work and that of my team, that for three months we have been working hard for this fight."

"If he does not have the capacity, veracity and heart to defend and be a champion, then let him vacate, because I am so hungry to be world champion; as well as showing it by giving high-quality matches and proving why I am the number one in the WBO world."

"I am in boxing because I want to be world champion, it would be easy to ask for compensation for his shortcomings, but that is not a remedy for the rudeness and lack of professionalism of Magdaleno. What I want is to fight with him and fulfill my dream."

Juárez indicated that his representative, Sean Gibbons, told him about the possibility of fight forWBO's interim title. Gibbons spoke with FranciscoValcárcel, president of the WBO. His opponent would be Filipino contender Marlon Tapales (30-2, 13 KO's).

"We do not exclude the possibility of competing for the interim world championship in November," Juarez said.

[QUOTE=SceneBoxer;18390070][I]"Tapales was offered a fight against Cesar Juarez for the interim WBO super bantamweight belt. But Tapales and his team decided not to take the fight because it was too close and his weight was way off."[/I][/QUOTE] give him a…

[QUOTE=Andre_parker1;18390012]tapales been wronged..why is he not given a shot at the title he lost on the scales again?because he has no reputable promoter behind him#fûck the alphabet organisations[/QUOTE] [I]"Tapales was offered a fight against Cesar Juarez for the interim WBO…

tapales been wronged..why is he not given a shot at the title he lost on the scales again?because he has no reputable promoter behind him#fûck the alphabet organisations

[QUOTE=lagako10;18123185]Tapales is a boxing genius he can fvked up this bum juarez[/QUOTE]Juarez is no bum just ask your countryman pagara how he got his azz handed to him by juarez. topales is gonna get his azz KOed just like your…

[QUOTE=1hourRun;18123292]De Pagara of de Fillipinas? bwahahaha!!! Juarez sucks! I favor Tapales to whoop his ass.[/QUOTE] That guy is better than the 90% of the bums that Choco Muertito fought and Juarez is better than all the nicas fighters actually except…