Horn captured the world title last Saturday night in Brisbane, Australia with an upset twelve round decision over Manny Pacquiao.

Marquez had faced Pacquiao four times - going 1-2-1 in the series. The last time they met, in 2012, Marquez scored a sensational one-punch knockout in the sixth round. 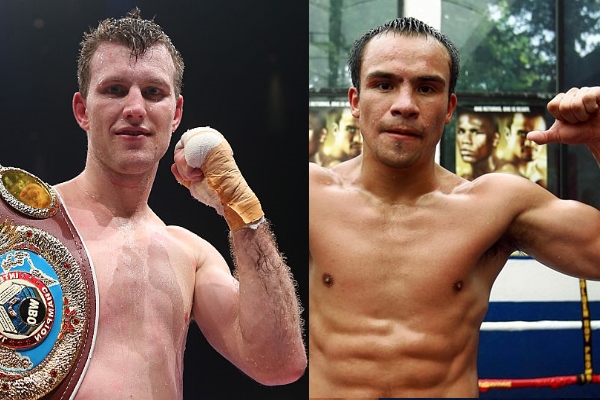 Marquez, 43 years old, is scheduled to return on a date in August and then wants a major fight before the year is over.

"I've been watching [Marquez training], so I do not think it's crazy of me [to want the fight with Horn], he's been looking super good [in camp]," Nacho said to ESPN Deportes after leaving the Romanza gym after a couple of hours of work with the ex-champion.

"Pacquiao failed himself, I think he is very involved in his political career and wasn't training as he should have been, although he is still a great fighter. And Marquez has all of the right faculties. Against Horn, the right technique would be imposed, although he is a fighter who climbs to the scale at welterweight and then comes into the fight as a middleweight."

Marquez is interested in facing Horn, but he doesn't want to overlook his return fight in August. That bout will be Marquez's first since May of 2014, when he dominated Mike Alvarado over twelve rounds.

"Look, I could see Horn being possibility, but I'm focused on the fight coming up right now. Whether I'm going to face [Miguel] Cotto in December or even this fight with Horn, the first thing I need to do right now is get through this fight so I can figure out how high I can reach," Marquez said.

"[Zanfer Promotions] is looking at August 19 and I'm training for that. I hope to find out the opponent and location shortly."

[QUOTE=cammoking123;17834019]I love it. Show Pac how it's done[/QUOTE] [QUOTE=Pound4PoundStud;17834072]Lol, it's just hilarious how every top rated welterweight would love a shot at Jeff Horn since they know he is clearly beatable! It's an easy WBO title grab. You name any…

[QUOTE=giacomino;17835589]Marquez is about the right age for a Horn opponent[/QUOTE] After he headbutts grandpa Marquez, he's going after De La Hoya.

[QUOTE=Billycostigan;17835099]If you honestly believe Marquez won the fourth fight with Pacquiao without the use of performance-enhancing drugs then you are clearly a moron and should probably stay off of boxing forums. There's a reason Marquez turned down a 5th fight…

Marquez coming to an old foe's escue. Horn is very beatable but I'm not sure what kind of shape Marquez is in. Leave him to Thurman or Spence. Better yet, let Porter maul him for 12 rounds.