NEW YORK – Argenis Mendez settled for a questionable draw Saturday night for the second time in less than two months.

Judge Julie Lederman scored the Dominican veteran a 97-93 winner over Juan Heraldez in their 10-rounder on the Deontay Wilder-Dominic Breazeale undercard at Barclays Center in Brooklyn. She was overruled by judges John Basile and Kevin Morgan, each of whom scored their junior welterweight bout even (95-95), which rendered it a majority draw. 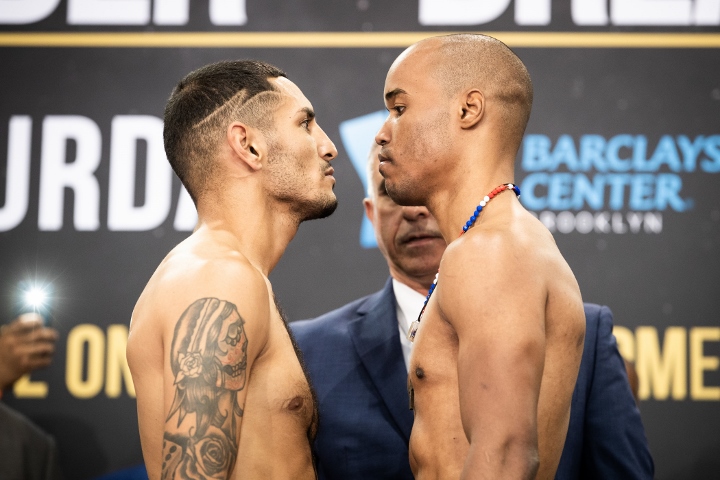 The 32-year-old Mendez, of Yonkers, New York, appeared to be on his way to a victory entering the 10th and final round.

A right hand by Mendez to the side of Heraldez’s head caught him with just over two minutes to go in the 10th round. About a minute later, Mendez landed a left to Heraldez’s body and a followed it up with a straight right hand.

Mendez landed an overhand right to the side of Heraldez’s head just after the midway mark of the ninth round. Late in the ninth, Mendez drilled Heraldez with a left hook that knocked him off balance.

Heraldez connected with a straight right hand after the halfway point of the fourth round, but neither fight was particularly accurate during those three minutes.

Mendez made Heraldez miss with many of his punches during the third round. Mendez also jabbed effectively in that round.

Follow a first round that lacked action, Mendez got the better of Heraldez during the second round. Mendez landed a left hook and a straight right hand within the final 30 seconds of those second three minutes.

[QUOTE=BOXING-SCRIBE;19754255]If this continues...I will do everything in my power to steer people away from boxing and into BKB. This is stooopid . Mendes won that bum from TMT is going [B]as far in boxing as 19lfctitles is going in life.…

Writing this from Santiago, DR: Mendez won! Going back on Tuesday, don't want to go back to redneckland.

Mendez won that hands down!

[QUOTE=revelated;19754204]I understand the draw - but I frankly felt that Mendez was a clear victor. And ironically, he was fighting more like Floyd than Heraldez was.[/QUOTE] I totally saw it as you did with Mendez being more fluid in the…

If this continues...I will do everything in my power to steer people away from boxing and into BKB. This is stooopid . Mendes won that bum from TMT is going as far in boxing as 19lfctitles is going in life.…