Joshua's New Opponent To Be Announced Next Week, Says Hearn

Joshua was scheduled to face undefeated challenger Jarrell Miller, in what would be the British superstar's United States debut, on June 1 at Madison Square Garden in New York City.

But a few days ago the entire event was rocked when Miller tested positive for a banned substance, and then the New York State Athletic Commission denied his application for a boxing license in the state. 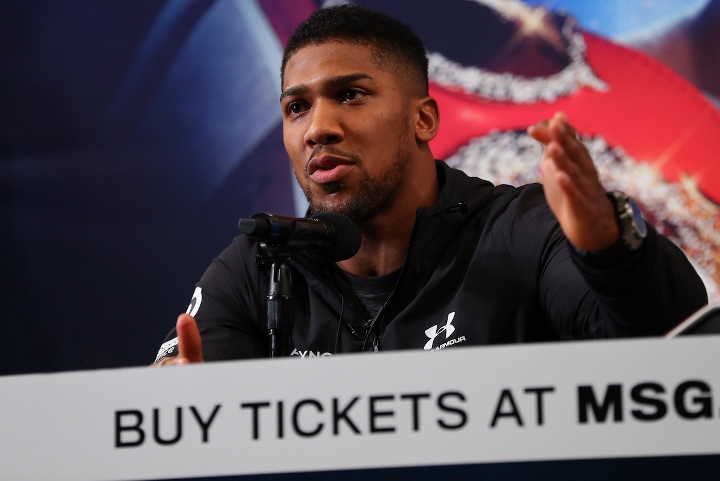 Miller has claimed his innocence and plans to appeal the outcome, but very rarely do these situations get reversed - even if the boxer ingested a substance through contamination.

Hearn has spoken to over a dozen people and he's close to securing a new opponent for his man.

Two of the bigger names in the pool, Luis Ortiz and Dillian Whyte, are not likely for the date.

"Obviously it's a fight in America, so from our point of view, we would like an American challenger really," Hearn told Sky Sports News. "I don't think it will be Dillian Whyte. You go through the list: Luis Ortiz; Adam Kownacki; Michael Hunter; Manuel Charr; Agit Kabayel, the European champion who beat Derek Chisora.

"There's probably seven or eight guys I think would fit the bill. Being an American debut, in an ideal world we would like it to be an American, or someone that fights in America. We're going through that and we're going to be working hard in the next couple of days. There will be an announcement from us in the early part of next week, locking in Anthony Joshua's next opponent.

"Luis Ortiz was one of the first people that I spoke to actually, his manager, a guy called Jay Jimenez, who we've worked with before. He told me it was too short notice. I disagreed with him, but they are going to be speaking to their fighter. I think the Luis Ortiz fight is a great fight, he has been promised the Deontay Wilder fight as well, by his team, which is a bit worrying for us to hear that news. I'm not sure if Ortiz is going to be the guy. Like I said, everyone has been calling."

Could only really be one of Hunter, Ortiz or Charr. Probably in that order. Unless Wlad's been in camp! I get that those 3 are not quite as exciting as loudmouth Miller to the general public, but are they honestly…

I hope it's not Hunter like many of you believe it is. Hunter is actually a good test for AJ, he has good upper body movement for a HW, has a good jab, is elusive, has decent to good power,…

Something has got to give .This is mooted as Sky box office and now there is a fighter who is expecting to be paid around £20m without any real feasible opponent. Who really should be an American ..Hunter will not…

[QUOTE=jas;19671265]Most likely michael hunter[/QUOTE] Yep! All bets are off. He is American, with DAZN, seems interested in the fight. Can’t see anyone else at the moment, am just praying it isn’t Manuel charr.

[QUOTE=Oshio;19671260]6 5million? I will take it even 3 weeks away. What has Ortiz got to lose[/QUOTE] Maybe he is on some drug himself? Maybe he needs to cycle off? What would be the point if he takes the fight and…