Joshua Vows To "Rise To The Occasion" in Andy Ruiz Rematch

Former heavyweight world champion Anthony Joshua is promising to "rise to the occasion" when he steps in the ring with Andy Ruiz for a second time.

Back in June, Joshua was dropped four times before Ruiz stopped him in the seventh round to capture the WBA, WBO, IBF, IBO heavyweight world titles at Madison Square Garden in New York City.

The rematch will land on December 7th in Saudi Arabia. 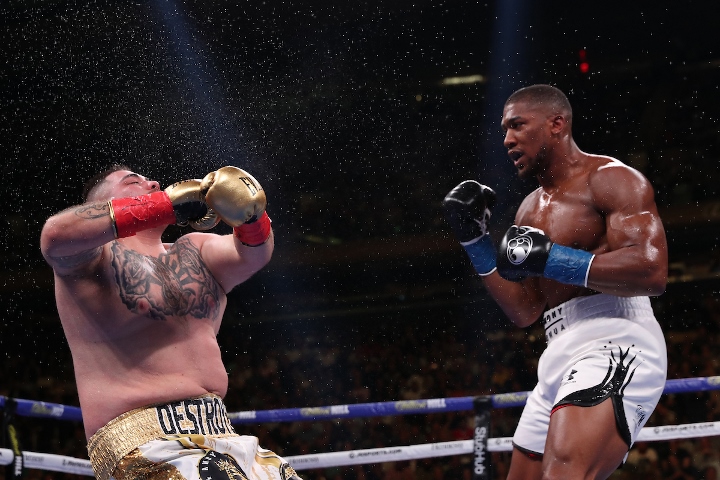 There were some who felt Joshua appeared to be far too relaxed when he came to the ring for the initial bout.

Joshua explains that he needs to be more "switched on" before the first bell is ever rung.

"I need to start taking this approach to my fights where I’m a bit more lively," Joshua said to BBC Sport. "I know I’m capable of it. There is too much at stake. If I go in there where I’m switched on, a time like the Ruiz fight where I am so relaxed, that might be the difference."

After tasting his first defeat, Joshua evaluated everything from top to bottom. He plans to rise to a higher level - in the same manner that he did when he challenged for world titles against Charles Martin in 2016 and Wladimir Klitschko in 2017. Another defeat would leave Joshua's career in a very bad position when it comes to his future outlook on the top level.

"I think I had to grieve and ask myself all the questions you would expect. People say 'you lost,' I call it a blip. I can’t wait to get in there and fight him. Every time I have fought a champion I have risen to the occasion," Joshua said.

[QUOTE=MDPopescu;20075990]... like most of the Millennials, AJ has some bizarre mental issues... and this isn't good at all at top level pro boxing...[/QUOTE] Sweat Icing on a volcano cake, did I laughed at that!! Such a fantastic post!!!!

[QUOTE=Thraxox;20075936]The amount of tears from fake Ruiz fans after Joshua knocks him out is going to be biblical.[/QUOTE] Doesnt take long for deluded AJ fans to forget there boy got beaten so bad he literally quit. The first time AJ…

He will rise, but not to the occasion. To a ten count

[QUOTE=apollocreed;20076112]Why the hell would Joshua not be ‘switched on’ when he’s defending his unified belts in the US for the first time at MSG?? The guy talks so much non sensical ****.[/QUOTE] My guess would be that he seriously underestimated…