The Mexican-American challenger was just in action last month, when he battered and stopped Alexander Dimitrenko. 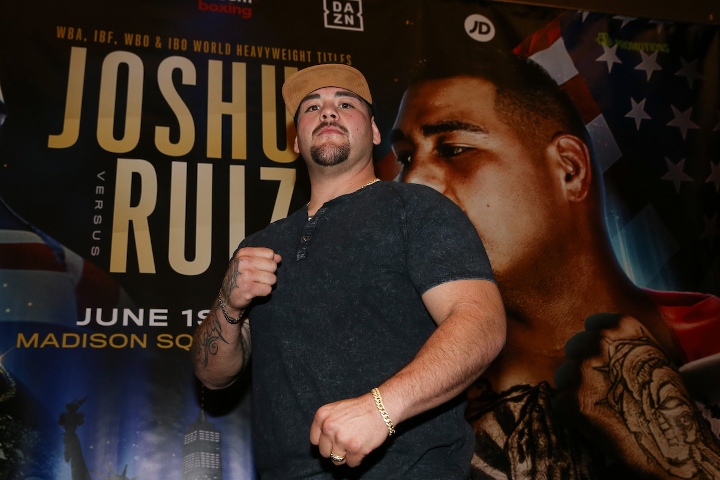 The sole defeat on Ruiz's record is a close points loss to Joseph Parker from December 2016.

Ruiz replaces the larger Jarrell Miller, who was pulled from the contest after failing three pre-fight drug tests. Miller came up positive for banned performance enhancers EPO, HGH and GW1516.

Joshua compared the two boxers, and feels Ruiz is a smarter, quicker and more accurate fighter in relation to Miller - although not as active with his punches or as big.

"Obviously with Miller he was 300lbs, his punch output was very high as well - so what I tried to do was adapt my training in terms of size and punch output and what I was going to do to someone that comes forward all the time," Joshua told Sky Sports News.

"Ruiz doesn't weigh as much, he is a lot quicker than Miller and I think he uses punch variety and punch selection a lot better than Miller does. His punch output is a lot lower but he is more accurate with his punches. I have to be better with my defence, a lot tighter and be smarter against someone like Ruiz. Even though he is not as big and doesn't work as hard to a certain degree, he is a lot smarter.

One bum replaced another bum. I hope no one is expecting a changing of the guard :lol1:

Sh[I]i[/I]t, I just realized the date of this fight. The night of the Champions League final. I guess I won't be catching the fight live as I'll either be out celebrating..or out drowning my sorrows.

Ruiz is there to be hit with that come forward style

Those positive tests saved AJ's career. Miller would've mauled him within an inch of his life.

Ruiz is rated higher than Miller, Breazeale, Schwarz... Don't understand how people would see him as a bum yet hails Wilder's opponent as legit