Anthony Joshua has rejected the claim by IBF, IBO, WBA, WBO heavyweight champion Andy Ruiz - who insists he was never hurt in their first meeting back in June.

Ruiz went down in the third round of the contest. When Joshua made an aggressive attempt to finish him off - Ruiz clipped him hard with a counter and the British star never recovered. Joshua went down two times in the same round, and then twice more in the seventh before the fight was waved off.

The rematch takes place on Saturday night in Saudi Arabia. 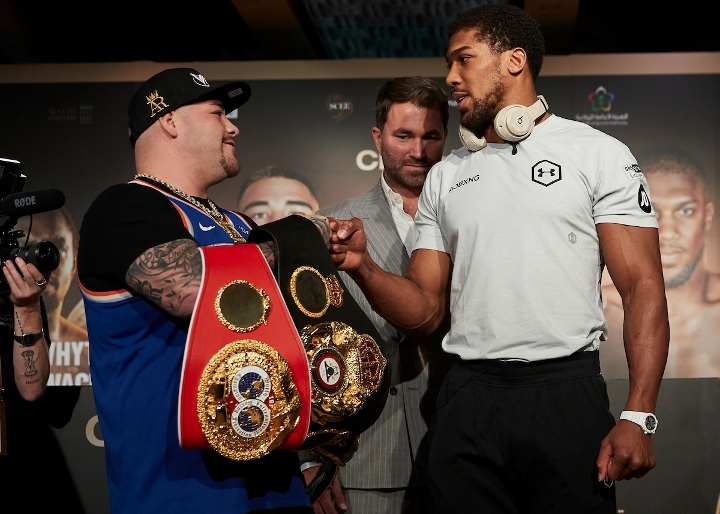 Ruiz has claimed in several interviews that he wasn't really hurt after getting knocked down - which allowed him to rock Joshua, who came in guns blazing with the belief that Ruiz was in serious trouble.

And Joshua once again denies the chatter that he quit in the seventh round of the fight.

"He was definitely hurt," Joshua exclusively told Sky Sports. "You don't go down unless you are hurt. It's such a difficult thing to say when you're fighting, because the adrenaline is high. A car probably could have gone into both of us, and we would have found a way to get up. I got put down four times, and got up.

"The only reason I didn't walk out into the middle of the ring was because my gum-shield wasn't in. I was waiting for the referee. He said: 'Are you ready to fight?' I said: 'Yes'. I was waiting for him to put my gum-shield in my mouth. But he waved off the fight. Was I hurt? Not to the point where I couldn't get up and stand on my feet. Was he hurt? Not to the point where he couldn't get up. But he was hurt enough that he felt that punch, for sure.

"I've got to learn from that situation, to be more responsible. Don't leave it for the referee to take responsibility. Take care of that situation. I don't think that I didn't want to fight on, because I wouldn't have got up. I would have stayed down. I was waiting for him to put my gum-shield back so I could continue to fight. Next time I will take more responsibility and say: 'I'm ready, ref, my gum-shield is in so let's go'. That's how I will deal with it, next time."

[QUOTE=pollywog;20234388]how do you know these things ? OK..so i'm imagining AJ knocking out Ruiz. WOW, it made or makes no difference to me at all![/QUOTE] How about now ? Are your feelings still the same? The glass jaw was tested…

[QUOTE=Noelanthony;20232533] I know this thought hasn’t even entered your paradigm but imagine if Joshua actually beats Ruiz on Saturday by knockout?[/QUOTE] how do you know these things ? OK..so i'm imagining AJ knocking out Ruiz. WOW, it made or makes…

[QUOTE=Weebler I;20232388]Well he did beat the ish out of him and take his titles...[/QUOTE] LOL, welcome back Weebler. He is in head differently. AJ wants to believe what he wants to believe than what actually happened. Wishful thinking is not…

Ruiz got caught with probably the cleanest shot so far in his pro career and he definitely felt it. He wasn't close to being out on his feet but I'm sure he wouldn't want to chance taking another shot like…

[QUOTE=alexguiness;20232862]If Ruiz was so badly rocked by Joshua, how did he manage to recover and proceed to put Joshua down twice in the same round?[/QUOTE] If he wasn't hurt then why did his legs suddenly collapse underneath him? I don't…