Joshua on Deontay Wilder's Molina Win: I'll Do it in Easier Fashion

Anthony Joshua will practice lessons learnt from mistakes made in the build-up to his defeat of Dominic Breazeale when he fights Eric Molina on December 10.

The IBF heavyweight champion makes the second defence of his title at the Manchester Arena having had a lengthy break following a demanding run.

Breazeale represented his third fight in six months, but Molina challenges him after a break of the same period. The defending champion recognises he stretched himself with commercial commitments while moving house and preparing for the June fight with Breazeale. 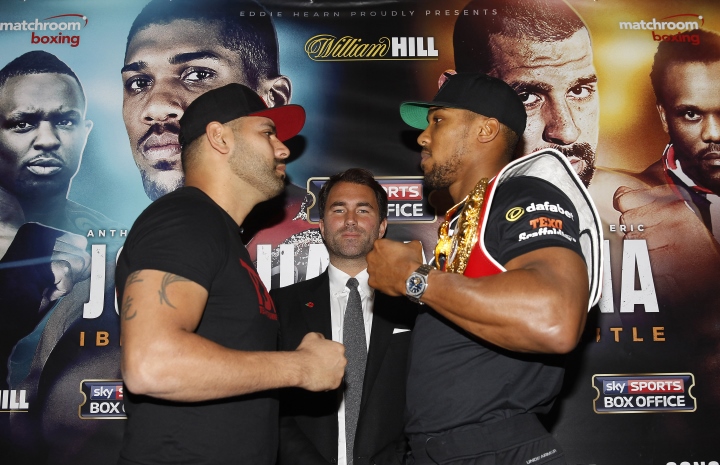 He revealed his intense schedule led to him catching glandular fever - his trainer Tony Sims advised him to withdraw when he did so - and what he considered a below-par performance in June.

Since then, however, he has been on holiday to Koh Samui in Thailand, to watch the Rio Olympic Games, and reflected on how his approach should change hereafter.

Asked what he had learnt from that period, the 27-year-old Joshua responded: "To listen to my coach. He advised me not to fight. He said I shouldn't fight but I thought I would take Breazeale out in two rounds or something - it actually went seven.

"If I was to go to an elite level, I can't make those mistakes because imagine if Breazeale had been popping shots back at me. I can't be too complacent with those decisions.

"I also just learnt more about my body and when it's time to rest, because the coaches will never tell you to rest. I was telling them I'm ill and they were like 'Don't worry, I'll ring you in an hour and see how you feel' - that's not letting me rest. Now I just listen to my body more.

"Say camp is going to start January first, two or three weeks before I (will) get all my (commercial) stuff in place then so when camp starts we haven't got to start back-tracking. All it is just managing and learning how to handle it better.

"That break after (fighting Breazeale) was a godsend. I could just re-charge my batteries. Now I'm preparing for this fight I've been in the gym for three-and-a-half weeks, and with no complaints."

America's Molina, 34, secured the most impressive victory of his career in April when he travelled to Poland and unexpectedly stopped former light-heavyweight and cruiserweight champion Tomasz Adamek in 10 rounds.

In his highest-profile fight, against the big-punching WBC champion Deontay Wilder in 2015, he also showed his resilience by surviving until the ninth.

Joshua is in the future expected to challenge the similarly-explosive Wilder in what would be the highest-profile fight between a British and American heavyweight since Lennox Lewis defeated Mike Tyson in 2002. The two remain rivals, and it is Wilder's showing Joshua is determined to improve upon.

"Yeah, 'cause it's America, Wilder, in a way it would be good," he said. "But I don't want to focus the win on Wilder's performance; it's about mine.

"I'll do it in easier fashion. Even if I took him 12 rounds but I played with him, that should say that I have a better skill-set. If I knock him out early, it just says I have better punching power. Either way, as long as I win, in a good fashion, I can tick a good box there."

@ 6.40 they talk about Deontay Wilder. The gloves are off - The YTuber capped off camera.

It's funny how before victory over Charles Martin and Dominic Breazeale some people were saying he was miles away from being ready to fight Wilder, now he's being @ for not doing it.

Safe bet he does better than Wilder. I mean Wilder gots the 3rd latest KO of Molina of Molina's 3 KO losses. Can he beat Arreola (150 seconds) or Ashanti Jordan (105 seconds) doe? Thats the more compelling question.

This fight goes 3 rounds at most, woodnt be surprised if it was over in a round. Pathetic money grabbing attempt by hearn for making this ppv. I certainly wont be buying

[QUOTE=Sadiqkingofko;17172331]who's bibical[/QUOTE] AJ! I give all fighters I'm interested in or disinterested in at times nicknames or aka's!