NEW YORK – Anthony Joshua isn’t insulted by all the attention that has been paid to a less meaningful rematch DAZN will stream four weeks before he and Andy Ruiz Jr. fight again.

Joshua’s positive perspective on the second bout between popular YouTubers KSI and Logan Paul is that it could lead to more mainstream support for boxing. The KSI-Logan Paul rematch is scheduled for November 9 at Staples Center in Los Angeles and will be promoted by Eddie Hearn’s Matchroom Boxing, Joshua’s promoter.

England’s Joshua discussed the potential impact of the KSI-Logan Paul rematch during his three-day, three-country press tour to promote his own heavyweight championship rematch with Ruiz, set for December 7 in Diriyah, Saudi Arabia.

“What people have to realize is you have to put all eyes on boxing,” Joshua said. “So, KSI and Logan Paul have got a bigger following than me and most of the heavyweights on this table combined. So, if all those eyes are now gonna watch me and watch my competitors and watch the sport of boxing – it’s gonna rise – I always say I’m for it. So, good luck to them both.” 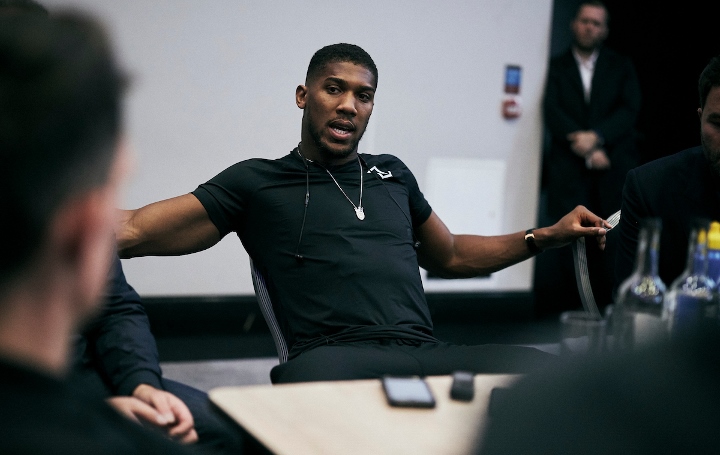 Unlike their first fight in August 2018 – a six-round amateur match that resulted in a majority draw – the KSI-Logan Paul rematch has been sanctioned as an official professional boxing match by the California State Athletic Commission. Their first fight, which was streamed live on YouTube from Manchester Arena in Manchester, England, generated 1,005,000 pay-per-view buys, which accounted for $11 million in revenue.

“I hope they take [their rematch] serious, because they could earn some respect here,” Joshua said. “People look at them as like a joke now and doubt them. But if they take it serious and they put on a good performance, people might scratch their head and say, ‘Hold on a minute. This wasn’t such a bad idea.’ I mean, you never know, YouTubers or this type of event might happen more often. And then it gives [the media] another platform to cover as well.”

KSI, whose real name is Olajide Olatunji, is from the same town as Joshua – Watford, England. He has more than 20 million subscribers on YouTube, 6.5 million followers on Instagram and almost 5 million Twitter followers.

Joshua, a superstar in the United Kingdom and one of the most popular boxers in the sport worldwide, has 9.5 million followers on Instagram and more than 2.5 million Twitter followers.

[QUOTE=DaNeutral.;20047222]Lol got ya, your inspirational break down is Joshua needs to concentrate. Your a genius.[/QUOTE] No sir , you are the genius We got that clear

[QUOTE=MulaKO;20047208]You are the essence of ignorance Was he or not distracted by Wilder ? So what makes you say he won’t be distracted by this My point is just he should be focusing on his own chit instead of using…

[QUOTE=DaNeutral.;20047215]What excuse am I making? Again your just saying words but nothing has any substance. If anything your making the excuses saying he needs to concentrate on this cuz of bla bla bla. Like I said, you just saying ****…

[QUOTE=MulaKO;20047199]Keep making excuses for your boy Isn’t that what excuse # 51 was , he had Wilder on his mind Fool[/QUOTE] What excuse am I making? Again your just saying words but nothing has any substance. If anything your making…