Joshua: I'll Definitely Be Beating Ruiz To The Punch Tomorrow!

Andy Ruiz weighed a whopping 283.7lb for his heavyweight title rematch with Anthony Joshua at Friday’s weigh-in, having piled on 15lb since he won the title from Joshua in June.

Ruiz, who wore a sombrero to the stage,  had posted videos early in his training camp for the fight claiming he had slimmed down, but there were no signs of any weight loss when he arrived in Saudi Arabia and rumours on Wednesday said that he would be “the same of a bit higher”.

That proved to be a conservative estimate as Ruiz did not even take off his vest for the weigh-in, which took place outside the Al Faisailah hotel, in Riyadh, where both boxers have been staying. 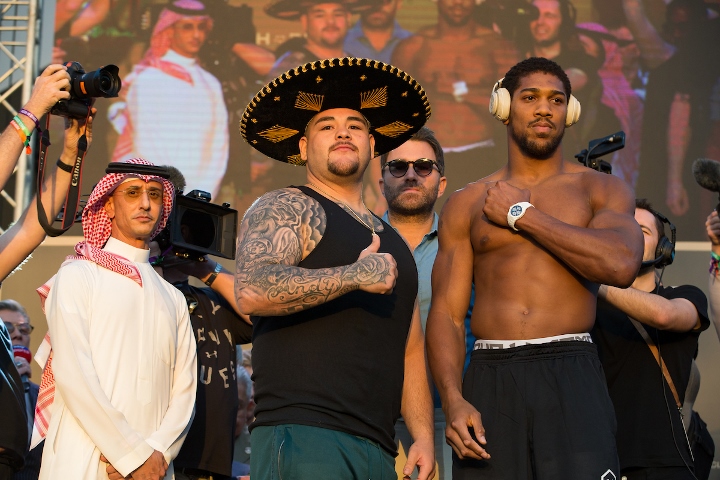 In contrast, Joshua weighed in at 237.5lb, 10lb lighter than for his first fight with Ruiz. It was the lightest he has scaled since his win over Denis Bakhtov in 2014, having cut out weight training for this camp.

Joshua, though, did not take try to read anything into Ruiz’s chronic lack of condition.

"He’s a big lad isn’t he, but it is not about weight, it is about hitting and not getting hit,” Joshua said. “It's the sweet science.”

Alexander Povetkin will have nearly a 3lb advantage for his WBA heavyweight title eliminator against Michael Hunter. Povetkin weighed 229.3lb compared to 226.8lb for Hunter.

Ruiz will become the second heaviest man to box for the world heavyweight title, behind only Nikolay Valuev. By putting on 15lb (the same amount of weight Buster Douglas put on between his win over Mike Tyson and loss to Evander Holyfield)  he has now moved above Primo Carnera, Jameel McCline and Danny Williamson that list.

"I feel good," Joshua told Sky Sports. "The weigh-in is important but for heavyweights it doesn’t really matter, it’s about the skills that pay the bills and that leads to victory, it’s not so much about the weight. But I am what I am and I feel good.

"He’s a big lad. They should make a super-heavyweight division because there is that much of a vast difference. The art of the game is to hit and not get hit, avoid them punches. Imagine how being three stone heavier and everyone saying how fast he is, I’ll definitely be beating him to the punch tomorrow."

My concern for Joshua is that Ruiz's style is totally wrong for AJ - not so much the fact that Ruiz works well at close range, but more to do with hand speed - we know already that Ruiz isn't…

I can’t see how the extra weight will help Ruiz it won’t make him hit harder.

If AJ just work behind the jab then he should do just fine. All he has to do is box, slow down the pace of the fight and utilize his physical advantages over the destroyer. In addition, he must fight…

[QUOTE=doom_specialist;20233719]He beat Ruiz to the punch in the first fight, and it didn't matter. He needs to stay focused after he gets Ruiz in trouble, now that he knows that Ruiz has faster hands that will hurt him if he…