Joshua: I Didn't Quit Against Andy Ruiz - That's His Opinion!

During the build up of their anticipated, heavyweight title rematch, Andy Ruiz and Anthony Joshua sat face-to-face in a studio for a face off for British television.

Ruiz looked Joshua deep in his eyes and said Joshua quit in the midst of the punishment he was taking after suffering four knockdowns during a seventh-round finish in June.

Joshua quelled any concerns about his heart, desire and determination ahead of their rematch Saturday in Saudi Arabia.

“I didn’t take it personal at all. That’s his opinion,” Joshua told BoxingScene.com in an interview when the topic of quitting was brought to his attention. “It’s my second rodeo. I’m calm. I’m not mentally weak … I’m not looking to prove much. I’m still competing at the top level. That’s just where I’m at. I just want my hand raised in the end. That’s the most important thing.” 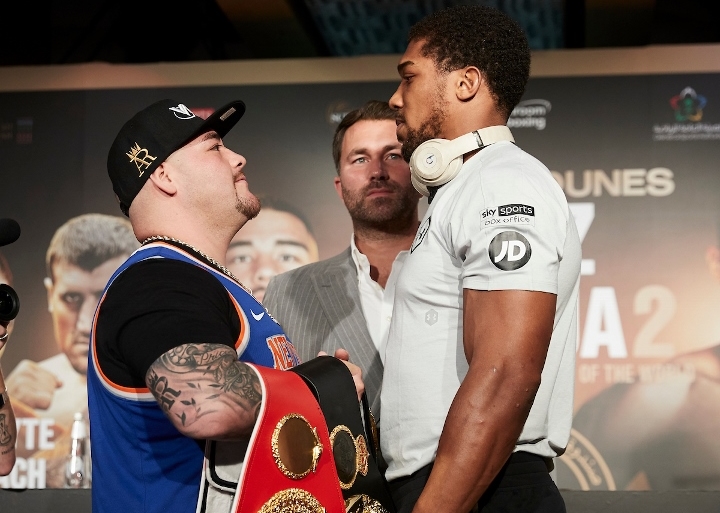 Joshua gave due credit to Ruiz in the ring at the Madison Square Garden in New York during his US debut immediately after their June face-off.

“Honestly, I don’t like making excuses. I’ve taken it, absorbed it, gotten rid of it and now I look forward to improving on myself against the current champion,” said Joshua. “I know I’m better than him, really. I’ve been training in an arena full of greatness in my training camp.”

Among Ruiz, Joshua has had many doubters and detractors following his first career loss.

It’s motivated him to embark on a six-month long training camp, the longest of his life. Once it concluded, it yielded a more lithe Joshua, who stepped on the scale 10 pounds lighter Friday than his original weight from June. Ruiz, meanwhile, was 15 pounds over his original June weight at 283 pounds.

Unbothered by it at all, Joshua appreciated the cross-continental adulation and attention he’s getting, good or bad.

“Thanks for tuning in,” said Joshua. “I appreciate their acknowledgement. All press is good press.”

Spitting your gum shield and not raising your hands are not really good ideas in buying time to recover!

I don't think he quit, but he wasn't sorry to see the end either.

How about our lying eyes? Do we believe them or your opinion?

I never thought Joshua quit either but I am glad the ref stopped the fight only because I knew Joshua was finished, but to me i never looked like Joshua was trying to quit. He was just seeing stars.