Joshua: I Should Drop McCracken? No Way! That's Small-Minded

Former world champion Anthony Joshua has hit back at the numerous critics who called for a new head trainer, in the aftermath of the boxer's shocking defeat back in June.

Joshua, trained since his pro debut by Rob McCracken, was dropped four times by Andy Ruiz - before the contest was waved off in the seventh round.

The Olympic gold medal winner will attempt to get revenge on December 7th, when he challenges Ruiz for the IBF, IBO, WBA, WBO world titles. 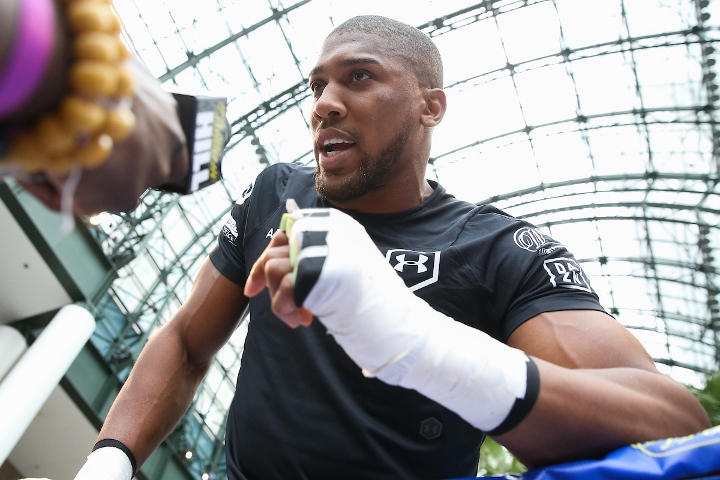 There are some observers who feel Joshua has continued to display offensive and defensive flaws that were never corrected. He's been rattled in several fights prior to the loss to Ruiz.

During the Sky Sports on-demand special, AJ: The Untold Truth, the boxer lashed out anyone who believes he should dump his coach.

"Whoever said that is a clown. Part ways with McCracken? No way. These people don't understand loyalty. These people aren't cut from the same cloth, if that's what they are suggesting. Whoever has that mindset should not bother talking to me, if they have that mindset," Joshua said.

"How could they say that? I've worked with two people in boxing - Sean Murphy, my trainer [at Finchley amateur gym]. Then a year-and-a-half later I was up to Sheffield training with Rob McCracken. They have built me, aside from boxing, as the man I am today. A father, a family man, a businessman who understands the responsibility of being a young African-British kid. They built that in me.

"I should never get rid of those types of people. Because I lost the belts I should get rid of the people that built me? No way. It's shallow-minded, small-minded. Mike Tyson could have lost to anyone but you can't get rid of [his trainer] Cus D'Amato. People do not truly understand what these people mean to your life."

Well, kid's a dumbass. I could fix him in a week or two. His problems are not hard to fix, he's got a **** trainer. Most boxers have **** trainers. Most trainers just hitch their wagon to a talent that…

[QUOTE=_Rexy_;20001842]I agree with you. It’s more his fan base that’s been echoing it being a lucky punch. Ruiz hit Joshua with a fast hard combo. Type of combos he’s been throwing his whole career. I gave Joshua one round for…

[QUOTE=makaveli1875;20001956]he has a glass chin and no stamina , not alot any trainer can do about that[/QUOTE] Except stamina training and defence training

[QUOTE=_Rexy_;20001822]When wilder said he was loyal to Al Haymon everyone called him an idiot and said it was a terrible decision. But let’s all applaud Joshua’s loyalty for keeping the same trainer he’s had since the amateurs.[/QUOTE] If you look,…

[QUOTE=1hourRun;20001805]Pea-brain A.J, cant learn anymore anyways. The only change that is required in Joshua's camp is the matchmaker.[/QUOTE] He's far more intelligent than most professional boxers.