Joshua: Fury Went Pro in 2008, Never Thought I Would Catch Up To Him

IBF, IBO, WBA, WBO heavyweight champion Anthony Joshua admits that he never expected to be in position for a showdown with Tyson Fury, who holds the WBC world title.

The 32-year-old Fury is only one year older than Joshua. He turned pro in 2008, which is five years before Joshua made the jump after winning gold in the 2012 Olympic games.

Now Joshua and Fury have an understanding in place, at least with the financial terms, for a two-fight series in 2021. 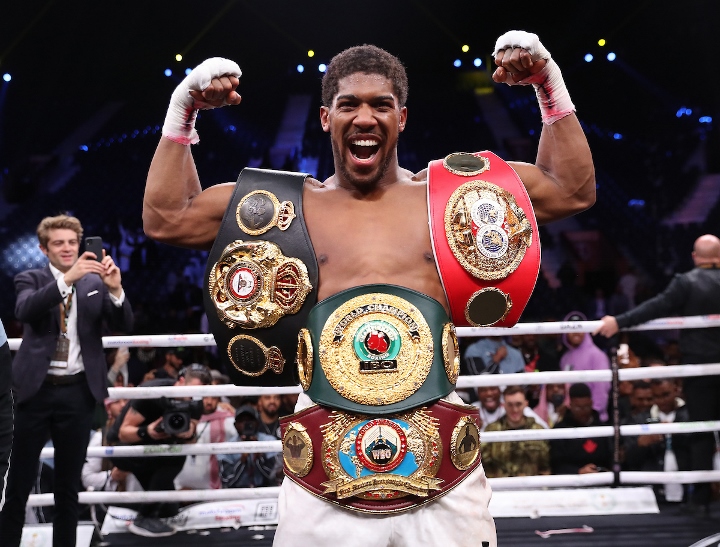 Joshua had his first amateur bout the same year Fury became a professional.

He never expected to reach the same standing as Fury, where the two of them hold every major title in the division.

"Remember, he was a heavyweight well before my time," Joshua told Sky Sports.

"He turned professional in 2008. That was the year I had my first amateur fight! I never thought I would catch up to Fury. He was never someone that was on my radar. So I've never known Tyson until I turned professional and started barking at the heels of these heavyweights who were docile.

"I started bringing some heat. Now they became relevant in my life. My relationship with Tyson is only because I progressed as quickly as I did, and he didn't progress as quickly. He's had two good wins - against Deontay Wilder and Wladimir Klitschko. Over a long period of time, a career that has spanned 12 years, I would have liked to have seen him in some more challenging competitions.

Joshua has a tentative fight against mandatory challenger Kubrat Pulev on December 12, with Fury returning on the tentative date of December 19 against Deontay Wilder in a trilogy bout.

[QUOTE=Toffee;20790033]I take it back. You're not in the 'didn't click the link brigade'. You're in the 'don't understand which parts of articles are direct quotes' brigade.[/QUOTE] Hurt fanboy and don't know what you're talking about, how many brigades can you…

[QUOTE=786;20789684]Clicked the link and read the whole thing before posting. What I said doesn't suggest I didn't read just because you disagree. More like the 'hurt fanboy' brigade with your emotional response.[/QUOTE] I take it back. You're not in the…

[QUOTE=Toffee;20788029]Another two for the "didn't click the link" brigade. It's getting pretty busy.[/QUOTE] Clicked the link and read the whole thing before posting. What I said doesn't suggest I didn't read just because you disagree. More like the 'hurt fanboy'…

Joshua is saying this to indirectly put Fury under some kind of pressure. But, Fury is king in this kind of thing

Who cares? Fury is the better fighter and anybody with a brain knows it. AJ went life and death with a 100 year old Vlad and got beat by little fat Ruiz. AJ can't shine Fury's shoes. I think the…