Joshua Doesn't Have Coronavirus After Attending Event With Prince Charles

Anthony Joshua reportedly hasn’t exhibited any coronavirus symptoms, despite attending an event with Prince Charles earlier this month in London.

A spokesperson for Prince Charles, the son of Queen Elizabeth II and the heir to the British throne, announced Wednesday that he tested positive for COVID-19 on Tuesday. The 71-year-old Prince of Wales is self-isolating in Scotland to help prevent spreading the virus that has caused a worldwide pandemic.

England’s Joshua, the IBF/IBO/WBA/WBO heavyweight champion, appeared at a Commonwealth Day service also attended by Prince Charles on March 9 at Westminster Abbey, a famed church in London. Joshua also is self-isolating at his home as a precaution.

“AJ is at home following government guidelines,” a spokesman for Joshua told London’s Daily Mail on Wednesday. “He is fit and well. He wishes everyone affected a speedy recovery and a huge thank you to all the front-line key workers.” 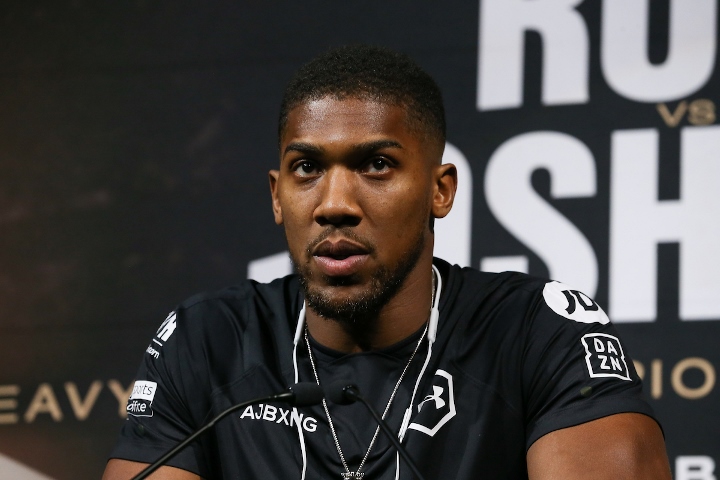 Joshua’s spokesperson didn’t say whether the 2012 Olympic gold medalist has been tested for coronavirus.

The 30-year-old Joshua (23-1, 21 KOs) is tentatively scheduled to make a mandatory defense of his IBF championship against Bulgaria’s Kubrat Pulev (28-1, 14 KOs) on June 20 at Tottenham Hotspur Stadium in London. Eddie Hearn, Joshua’s promoter, has said their 12-round title fight could be postponed until July 25 because Tottenham Hotspur’s home soccer schedule has been altered by the coronavirus pandemic.

Ruiz scored one of the biggest upsets in heavyweight history six months earlier, when he knocked down the heavily favored Joshua four times and stopped him in the seventh round June 1 at Madison Square Garden in New York.

[QUOTE=BangEM;20480322]^^^^Why are yanks so corny and dumb? This guy up there takes the cake when it comes to being the corniest and dumbest fccker running around. The pillock is always rambling like a canon folder. What a bellend![/QUOTE] He's Elie…

[QUOTE=theface07;20481152]Yet you fail to show the clip of Wilder being given extra time to recover for no apparent reason against Ortiz in the first fight. You have gotta be the most hypocritical, double standard having fan on here.[/QUOTE] No apparent…

Joshua have immortal cells to protect him of the Corona Virus. :439:

[QUOTE=1hourRun;20480282]So Anthony met royalty on March the ninth? What a coincidence, did you all know, the 70-80's renown British Rock Band 'Queen' achieved gold certification by EMI on March 9 1976, for their classic album 'A Night At The Opera'…