Josh Warrington will meet Kid Galahad in three months’ time as he makes the second defence of his world title.

The Leeds man will return to the scene of his victory against Dennis Ceylan – in the world title final eliminator back in October 2017 – to take on his mandatory challenger from Sheffield on June 15.

Warrington and Galahad will clash at the First Direct Arena, exclusively live on BT Sport, with the current champion looking to dispatch of his Yorkshire rival ahead of Stateside trips to potentially face WBO champion Oscar Valdez or WBA Super world champion Leo Santa Cruz. 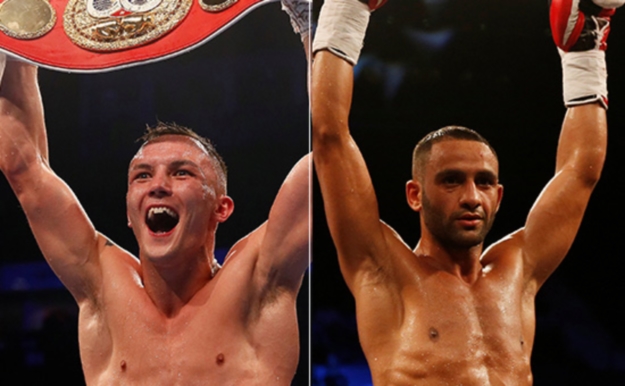 “All of a sudden people are saying I am capable of beating every featherweight in the world and with that comes expectation,” Warrington, the former British, Commonwealth, European and WBC International champion who dethroned Lee Selby last May before beating Carl Frampton in Manchester in December, said. “I will be 100 percent focused and looking to do a job.

“I am concentrating purely on Barry [Awad, Kid Galahad’s real name], but after this I want one of the other champions – I want champion after champion.”

Galahad was last in action in Sheffield in December, exclusively live on Sky Sports, when he outpointed Brayan Mairena over six just a few weeks after gaining mandatory status with a win over Toka Kahn Clary in Boston back in October.

“Josh’s biggest asset is that people underestimate him and he is a lot better than he looks,” Galahad, who won British, Commonwealth, European and international titles at super-bantamweight before moving up to featherweight and winning an IBF Inter-Continental crown.

“He beat me fair and square when we were amateurs, but down the line I knew I would always fight him again.”

Galahad believes he will break down Warrington, predicting “his Dad who trains him will stop the fight by throwing in the towel around round six, seven or eight.”

But Warrington retaliated and said that it’s fighter against fighter, with nothing else being an issue once the fight is underway.

“He isn’t in touch with reality,” Warrington added, “and is talking daft. He can spout off all he likes, but when the first bell goes, it will be me against him and we will see how special he and his team are then.”

Looking forward to this fight

...Let's keep it at UD. I'm thinking no on stoppage here.

You'd think people (not here per se, but in general) would have taken the hint to not underestimate Warrington after those last two outings, but...here we are. KG gives him a harder time than Frampton, but I still give this…

Warrington is gonna beat Galahad up but it won’t be easy as Galahad is known for stinking up a fight and can fight negatively! Anyways, Wilder was robbed of KO victory!

I hope Warrington wins only because he guarantees action packed fights and he's fun to watch. His scrap with Frampton was a classic.