Josh Taylor: The Next Step Could Be Anthony Yigit, Euro Title

Two weeks ago, Josh Taylor took a huge step closer to a world title shot with a ninth-round stoppage of former world champion Miguel Vazquez at the Royal Highland Centre in Ingliston.

The 26-year-old Scot from Prestonpans knew the first defence of his WBC silver super-lightweight belt against the 30-year-old Mexican would be a clear step up in class.

Vazquez's record of five losses in 44 fights owed everything to the fact he had only been beaten by the best - and he had never been stopped. 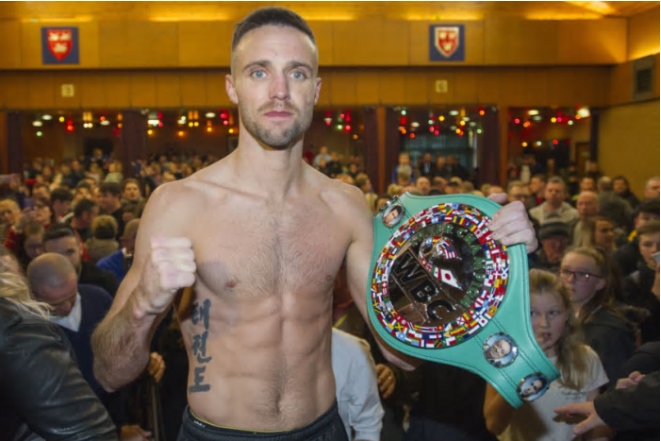 He had never been stopped until a right hook to the body by Taylor brought a thrilling and pulsating fight to an end.

Taylor now has the perfect record of 11-0 and can look for bigger fights with his reputation further enhanced after an impressive defeat of a former long-reigning world champion.

At the end of the fight, Taylor upped the tempo in the eighth as a flurry of accurate deliveries rousing the crowd and he stepped up again in the ninth with a body shot that Vazquez right on the button and he was unable to beat the count.

"I'm still over the moon with it," Taylor told STV. "I've just watched the fight back just now and there were a few things I could have done better to make life easier for myself.

"I had to grit my teeth and get in there but it was a good solid performance and I put in a bit of a statement by being the first guy to stop him. I think it definitely has gone Stateside. That's where all the big fights are just now.

"All the champions are over there so I think my name is definitely out there in America now. Belts have just become vacant so the division is wide open. I'm hopefully right in the mix now for getting involved in some big fights and hopefully getting that one step closer to becoming world champion.

"I think the next step is maybe looking at that European belt. Anthony Yigit is the champion and I boxed him and beat him in the amateurs. That's a fight we're looking at as potentially next. He's fighting in a couple of weeks so if he wins that could be next. We need to wait and see and take it from there."

Honest, Prograis is stiffing the competition, full blown, young jr welters. Josh is having his way, but going deep with shaky competition. Ohara who? Really?

[QUOTE=mlac;18225169]We dont know how good Prograis is yet before we start hyping him. Taylor has proved himself with his last few win's, prograis hasnt.[/QUOTE] I know how good Vazquez is and you're hyping Taylor off of that.

[QUOTE=mlac;18225135]I'd prefer to see him go for the Iceman/Prograis winner, i feel like the lipinets is such a low reward fight for medium/high risk. He's a tough little bastard regardless of his performance in his last fight.[/QUOTE] I think Imam/Ramirez…

[QUOTE=Corelone;18225167]I like Josh, but he's not ready for that. Vazquez was always a mauler, he grappled and stunk. Vazquez just couldn't muscle a bigger, younger man. Nice KO, but Vazquez was never the best even at 135. A world of…

[QUOTE=mlac;18225135]I'd prefer to see him go for the Iceman/Prograis winner, i feel like the lipinets is such a low reward fight for medium/high risk. He's a tough little bastard regardless of his performance in his last fight.[/QUOTE] I like Josh,…