Josh Taylor: I Want Jose Ramirez Next - I'd Whip His Ass All Day!

"I think I put his ribcage through his back,” said Josh Taylor backstage at the York Hall in a sort of half apology, half confession. “I felt it sink in when it landed, although I didn’t expect it to have that effect.

"It was an easy night's work. Short and sweet but there are big things to come."

If Apinun Khongsong ever really was a potential banana skin, Taylor removed him with the minimum of fuss. One left hook to the right side of his ribs was all it took. When it landed it, the punch didn’t seem that special, but it had a devastating effect.

Khongsong fell to the floor like he had been dropped from the ceiling and he stayed there, long beyond referee Phil Edwards counted to ten. He briefly made it back to his feet but was then back on the canvas before paramedics loaded him onto a stretcher and took him to an ambulance and to hospital. He is due to fly back to Thailand on Sunday, a 12-hour flight that will probably be one of the less comfortable of his life.

“I knew from watching videos of him that he swings on the break when you are close on the clinch, straight away with a hook or an uppercut,” Taylor said. “So I saw that coming, smothered him up and then pushed him against the ropes and as he threw the right hand, I threw the left hook, which I felt sinking right in.

“I knew it was a good shot. I didn’t know it hurt him to that extent until I turned around and saw him lying on the floor. I felt it going right through my arm.” 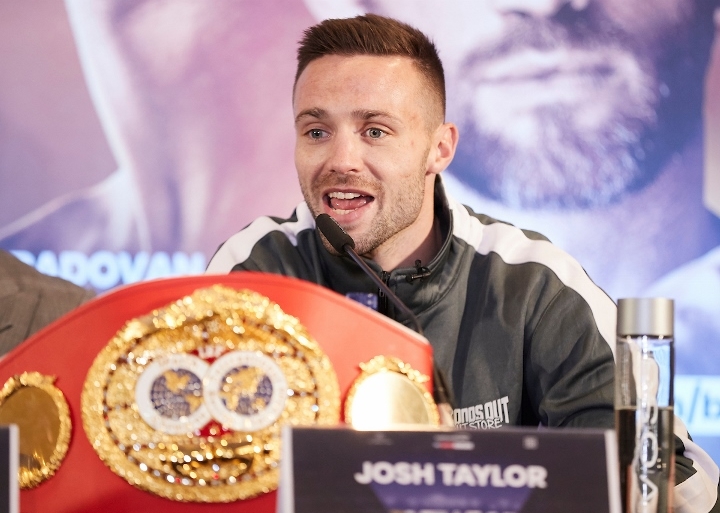 Taylor said he believed Khongsong was a serious threat.

“I know people are going to say you are talking nonsense, but I would go as far as to day that was the heaviest puncher I have ever been in with as a professional. He came out straight away with a stiff jab and I felt it was quite strong. Then he caught me with a one-two and nicked me on the end of the shot. I felt the weight of it straight away. That switched me on to take my time and set things up and be patient rather than land a heavy shot right away.”

So, in just 161 seconds, Taylor had got rid of his IBF mandatory contender, retaining both his IBF and WBA titles and eased a path to an undisputed world super-lightweight title fight with Jose Ramirez. When that will happen in this COVID age and with Jack Catterall pressing his case as the mandatory to the American’s WBO title is anyone’s guess.

Part of the lure of signing with Top Rank, after Taylor broke up with Barry McGuigan’s Cyclone Promotions, was the Ramirez fight, as the American is also signed to the company. But fights are difficult to make right now, especially if fighters’ financial expectations are being dramatically lowered without the prospect of paying fans.

“I want Ramirez next 100 percent,” Taylor said. “He is a very good champion, he is unbeaten like myself, hungry and at the top of his game. I thought in the [Viktor] Postol fight that wasn’t a good performance at all. I do think he can perform better than that, given the circumstances, but I wasn't impressed by what I saw from him.

“I want that fight now. I believe I would whip his arse all day long. I believe I have the beating of him. I have never seen anything from him I haven’t seen before.

“I know the situation with the mandatory, but hopefully we can get that worked out. I would like for selfish and personal reasons to get that fight next. I feel I deserve it. I’ve been in big fight after big fight, never ducked anyone, never ducked a tournament, unlike someone else. I’m game. I would rather wait for the fans to get back for that one.  I think it’s one of the biggest fights in boxing for all the belts. A fight of that magnitude would be better with the fans there on these shores or America.”

[QUOTE=Mr Bean;20782571]That fight with Taylor was awful, certainly looked like the Thai gentleman took a dive...embarassing really. Good to see Taylor back after nearly a year out and the troubles with the law and now he's got his new promoters,…

[QUOTE=BlackR0bbb;20782736][B][I]If Taylor was the "boxer" you fancy him to be, he would not have gotten into such a tear up against Prograis, a fight many believe he lost. Why is the Tarten Tomato Can hiding at 140 so long? Shouldn't…