Josh Taylor Explains Why He Held Back During Chisora's Outburst

Josh Taylor joked that if trouble had erupted after Dereck Chisora’s outburst at their London press conference today, he might have ended up tag-teaming with Regis Prograis against the heavyweight.

Chisora let it be known that he was unhappy that his fight against Joseph Parker was chief supports to the World Boxing Super Series light-welterweight final between Taylor, the IBF champion, and Regis Prograis, the WBA champion.

He went on to say that “nobody cares” about lighter weights and insulted the Muhammad Ali Trophy that Taylor and Prograis will be boxing for. 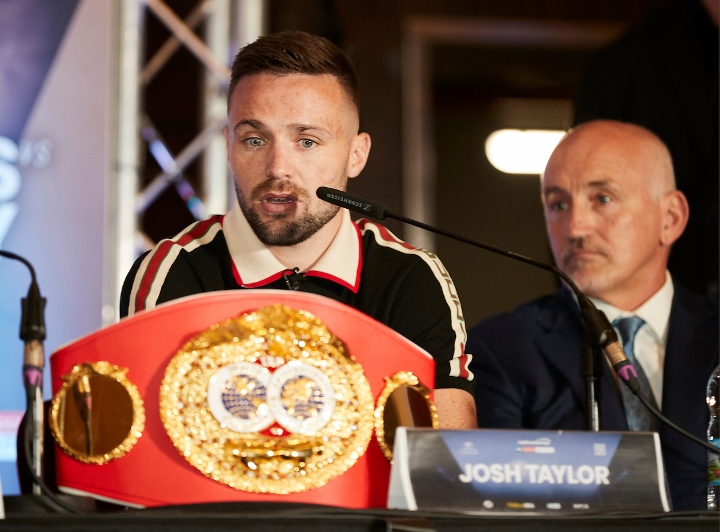 With Chisora’s past record at press conferences, which included brawling with David Haye and throwing a table at Dillian Whyte, it led to an awkward moment for the other people on the stage and Taylor said he was not particularly tempted to break it.

“I wouldn’t have wanted to have my first London fight right here today but maybe me and Regis could have tag-teamed. He could have got him from behind and I would have attacked from the front.”

Taylor added that he had not real idea of the motivation for Chisora’s outburst.

“It might just be a punt from Dereck to do more pay-per-view sales, he has form for doing that sort of thing,” Taylor said.

“He has done it in the past. That was one of the reasons I didn’t say anything, he might have flipped a table and charged at me like a bull.”

Chisora is a fool for attacking lighter weights. He sounded ridiculous on stage.

Prograis is listening, he's getting angrier and angrier :lol1:....then his inner New Orleans comes out :lol1:. We're number one and number two!

If I was one of them, I wouldn't bring up the tag team ***** as well. There are weight divisions for a reason :burnout::burnout: I would say "speak to the promoter Chis"

Taylor kept silent cause he didn't want a 260 Pound fist in his mouth.