Josh Taylor Admits That He Hasn't Secured Recognition He Deserves

Josh Taylor (16-0) will defend his WBA and IBF belts against mandatory challenger Apinun Khongsong in London on Saturday.

Should he win, the target is a 2021 full division unification with WBC, WBO champion Jose Ramirez.

A victory over Ramirez would make Taylor the first undisputed world champion in Scotland since Ken Buchanan almost 50 years ago. 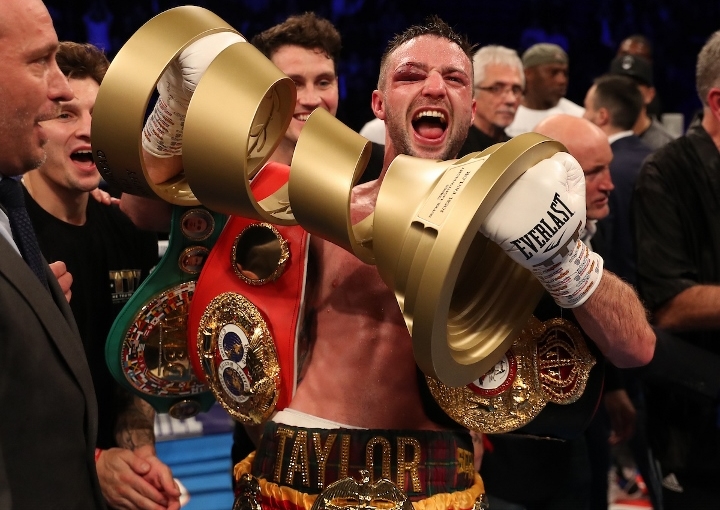 Even with all of his success as a pro, Taylor is not exactly a household name with his home fans.

While other athletes are idolized and closely followed in his country, Taylor had been unable to secure that same level of recognition.

To further grow his brand outside of Scotland, he made a decision earlier this year to sign a promotional deal with Las Vegas-based Top Rank.

“I’ve not had the recognition that I feel I really deserve, especially given what I’ve achieved so quickly in my career. Boxing fans and sports fans know who I am but I think I deserve to be a wee bit more popular and more of a name in Scotland. I don’t live for that and it’s not something that hugely bothers me but I just think if I were English or Irish I’d be seen as the best thing since sliced bread," Taylor told the Glasgow Times.

“You look at Ricky Burns, a three-weight world champion. And outside of boxing and a few other sports fans, do people really know who he is? Probably not. And that’s a crying shame when you consider what we’ve both achieved for Scottish sport. But I’m grateful to the boxing fans who follow us all the way. I want to do it for them and for my country and the flag. I want to keep Scotland on the map.

“It would be brilliant to have that fight with Ramirez] in Edinburgh but at that time of the year where is it going to be? I’ve no problem with having fights in Glasgow as I love the people there and I’ve always had a warm reception. But ultimately you want to fight in your home city if you can as I’m an Edinburgh boy.

“Edinburgh is the capital city and for it not to have an arena for major indoor events is an absolute joke. They’re doing far too many student accommodations all over the place, rather than building the city for the people. They’ve doing up Meadowbank but at the back end where the velodrome was they’re building more accommodation. That bit of land there was huge and could have been a big indoor arena. I want to have these big nights in my hometown but it’s just not possible at the moment.”

My man 1hourRun hooking the fish :lol1: :lol1: I'm pretty sure Taylor has come out with some anti-English stuff in the past, I think during the world cup.

Sadly Josh Taylor is deluded. He engages in sectarian and bigoted nonsense on social media, racially abuses doormen for stopping cocaine snorting and fights for the largest drug dealer in Europe to help him launder money. He may be talented…

Wait a minute when did he get a ABC title ?

I am a big Ramírez fan, but I’m also a fan of Josh Taylor. ...But I actually feel Taylor will take this one. Dude is super talented.

He deserves credit and gets it from proper boxing fans around the world. It's a different story with casual fans though, home and abroad, as we know. Lesser fighters can be well more known. It's would be massive accomplishment if…