The Ford Center at The Star, Frisco - Former WBO heavyweight champion Joseph Parker (27-2, 21 KOs) returned for the first time since June 2019, stopping Shawndell Winters (13-3, 12 KOs) in the fifth round.

Parker was using his size to press forward on Winters, landing combinations at close range. Winders' showed his chin, taking the punches and firing back with counters.

Parker continued to land the harder shots in the second and third. A big right hand sent Winters down at the end of the third. In the fourth, it was Winters who landed several good punches and created a cut around the right eye of Parker. 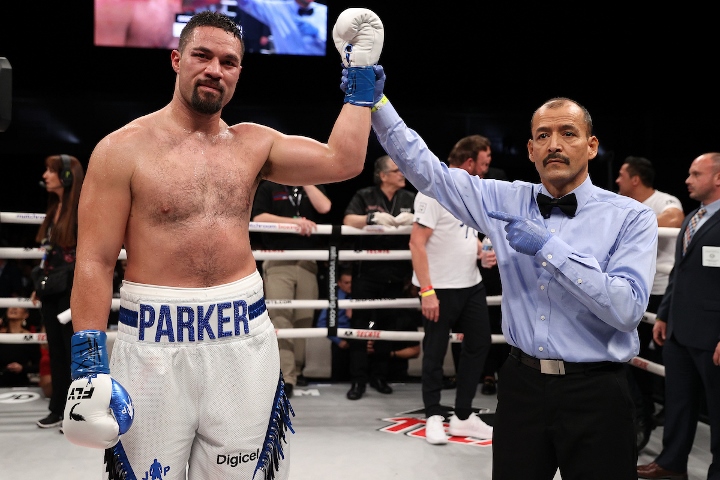 In the fifth, Parker landed a three punch combination that sent Winters crashing to the mat. Winters was struggling to get to his feet and the fight was waved off.

“A win is a win. Good to get a win. I’m going to take the win, celebrate, and leave it up to my team and Eddie to figure out what’s next. I just have to be patient, slow down my punches, and make them more meaningful. No excuses, I was training hard, and just excited to be back in the ring," Parker said.

Parker would like to face either Derek Chisora or a rematch with Dillian Whyte. Both Chirora and Whyte have fights coming in the coming months, with Chisora facing Oleksandr Usyk and Whyte taking on Alexander Povetkin.

“I want to relax and leave it to Eddie Hearn to discuss with my team. I want to keep busy and get two more fights this year and finish up with a bang. I’d like to fight Chisora because I wanted to reschedule, and I want Dillian Whyte again - the top five and top 10 in the world," Parker said.

[QUOTE=Tonyu;20439320]Parker beats both Chisora and Whyte. Hopefully get a bettet ref than first Whyte fight who did him a disservice with the head but incident.[/QUOTE] Whyte has already beaten Parker. The ref, like everyone else, didn't see the accidental head…

[QUOTE=Jkp;20436805]Chisora is a C grade, but hes better then the D graders Whyte normally picks. Whyte been fighting the smallest and oldest fighters he can get away with, like Rivas and Wach. And looking awful doing it. Whyte needs to…

Parker beats both Chisora and Whyte. Hopefully get a bettet ref than first Whyte fight who did him a disservice with the head but incident.

I'd be happy with both

He should get the DW one. He lost because of a headbutt, honestly. I want all those HW's grouped behind the big 3 to fight each other.