Joseph Parker Is The Breakout Star Of Boxing's Hiatus

There isn’t a whole lot boxers can do to enhance their careers during lockdown. For most fighters, a day probably looks something like this: Wake up, go for a socially distanced run, do some sort of strength work with whatever minimal equipment they have in their home, then pick up their phones and float theoretical ideas out there on social media about fights they would like to have once the world opens back up again.

For Joseph Parker, his days mostly look the same. In a recent interview with The Sportsman, Parker revealed that he constructed a home gym before lockdown began but didn’t install any boxing equipment. But with the time he would normally spend working on technique, he has instead essentially become a full-time actor. Through a series of videos on Instagram and Twitter, the former heavyweight titleholder from New Zealand has become one of the coronavirus era’s breakout stars.

With the help of filmmaker Kerry Russell, Parker has starred in various reenactments of iconic films, including Love Actually, Step Brothers, Grease, The Rocky Horror Picture Show, and most recently, Anchorman. The clips, in particular his Grease performance, have gone viral. And not just viral within the boxing community, but viral to the point that people who didn’t know who Parker was have watched them, and those who do know who he is have clicked on them and said “wait…Joseph Parker?!”

“We just sort of mucked around at the start just had a bit of fun and I think after the first one we go ‘ok that’s enough of that back to the training vids’ and then there were just loads of people online saying how much they loved it and how much joy it brought, so we thought we may as well keep going because we were having loads of fun," Russell told 1News in New Zealand. Every boxer with a phone has published some kind of fitness update or a reminder that they’re still grinding and staying ready, but those are par for the course at this point.

Parker has instead relied upon two things that have become currency in the quarantine marketplace: Relatability and nostalgia. As Parker is dancing through his house with his wife interpreting Grease, his children can be seen looking confused as to why their parents are acting that way. Viewers can relate to the goofiness that has materialized in isolation, and also laugh at the familiar jokes of the popular movies, ones we watched when times were much simpler.

It’s a formula that has worked for the breakout stars of quarantine in other industries. D-Nice’s Instagram live dance parties, or Swizz Beatz and Timbaland’s Verzuz music battles, have become appointment viewing for millions of people. Fans get to see their favorite performers in their homes, unfiltered, and communally listen to their favorite songs of yesteryear. Similarly, Toronto-based rapper and singer, has completely altered his status and image through his Quarantine Radio streams. He has transformed from a gruff, unheralded major label artist to an engaging cultural leader of the moment, leading hilarious, raunchy free-for-alls on Instagram live that occasionally get shut down.

Parker’s approach is far more wholesome, but the effect may be the same. While boxing has produced some of the most famous people, let alone athletes, of all-time, the number of crossover stars in recent years is relatively small. Without ever stepping in the ring, or even hitting a heavy bag since he doesn’t own one, Parker has garnered mainstream attention in a way he couldn’t muster even when he won a heavyweight title. 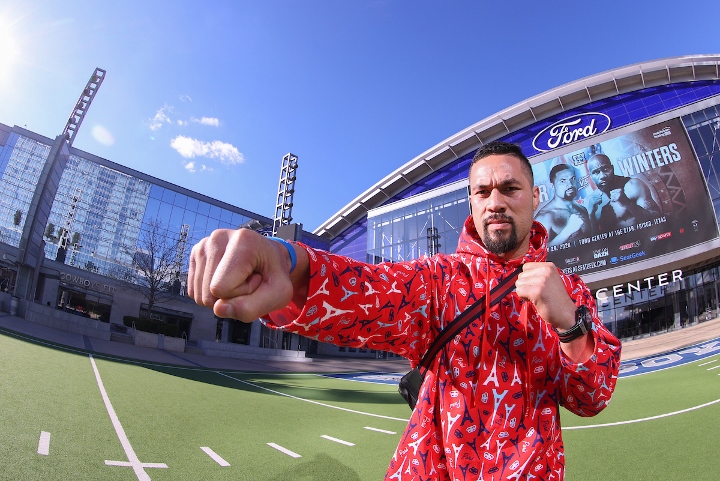 The 28-year old was one of the last fighters to take part in a major card in the United States when he defeated Shawndell Winters on February 29 in Frisco, TX on the undercard of Mikey Garcia-Jessie Vargas. Eleven days later, the world discovered the severity of the COVID-19 threat when Utah Jazz star Rudy Gobert tested positive and Tom Hanks revealed he too had contracted the virus, and boxing, along with just about everything else, was effectively shut down for the foreseeable future.

But even prior to that, Parker was through no fault of his own “socially distanced” from the major names in the division. In October of 2019, he was scheduled to face Dereck Chisora, but a horrific poisonous spider bite shut his body down and forced him out of the fight (don’t Google it if you’re an arachnophobe). As a result, he was taken out of the gym for weeks, and during that time, all of the other significant heavies he could conceivably have fought were tied up with negotiations and other scheduled bouts. Attempts to lure Dillian Whyte away from other potential opportunities and into a fight with him haven’t resulted in a signature anywhere quite yet.

Nonetheless, Parker looks like he might be in a position to capitalize on his new-found internet fame pretty soon. He happens to hail from New Zealand, a country that has been praised for its successful managing of the COVID-19 outbreak thanks to very stringent lockdown measures put in place by Prime Minister Jacinda Ardern. As early as today, domestic travel, bars, and gatherings of up to 100 people could be permissible.

Parker’s managed David Higgins has told Sky Sports that an August bout against veteran Lucas Browne is being explored in what he describes as a “New Zealand bubble.” The bout would take place in front of no more than 100 people, and would aid in launching DAZN in New Zealand as well. It is one of the only fights involving a major fighter that is being credibly explored to take place before the end of summer, outside of the string of fights in Mexico recently proposed by Fernando Beltran.

If everything goes to plan, Parker could have 100% of the boxing audience, and a new-found one as well, paying attention to him by August.

[QUOTE=Angeljuice;20565142]New Zealand and Australia are separate countries too.[/QUOTE] There not separate there's a bridge between them.

[QUOTE=Angeljuice;20558974]I don't think anybody is afraid of Joseph Parker.[/QUOTE] Whyte is. Whyte knows he isn't winning lottery with a head butt again.

[QUOTE=theface07;20563377]Are you really that stupid? When boxing comes back, it's going to be domestic fights because international matchups aren't happening until some restrictions are removed. What other heavyweight matchup could they make in that part of the world right now?…

[QUOTE=theface07;20563377]Are you really that stupid? When boxing comes back, it's going to be domestic fights because international matchups aren't happening until some restrictions are removed. What other heavyweight matchup could they make in that part of the world right now?…