Joseph Diaz: I Want To Fight Cancio Again In My Next Fight

Andrew Cancio’s entire title reign could wind up revisiting old business—or so hopes the last man to defeat him.

Joseph Diaz Jr. sat ringside as Cancio scored a repeat knockout win over Alberto Machado in their 130-pound title fight rematch Friday evening at Fantasy Springs Casino in Indio, Calif. The 2012 U.S. Olympian and current super featherweight contender was in attendance less as a patron than he was to scout the event, with every intention of facing the winner.

“I want to fight Cancio again in my next fight,” Diaz (29-1, 15KOs) told DAZN’s Ryan Ruocco after Friday’s main event, which saw Cancio stop Machado in three rounds, one fewer round than it took to win the title this past February. 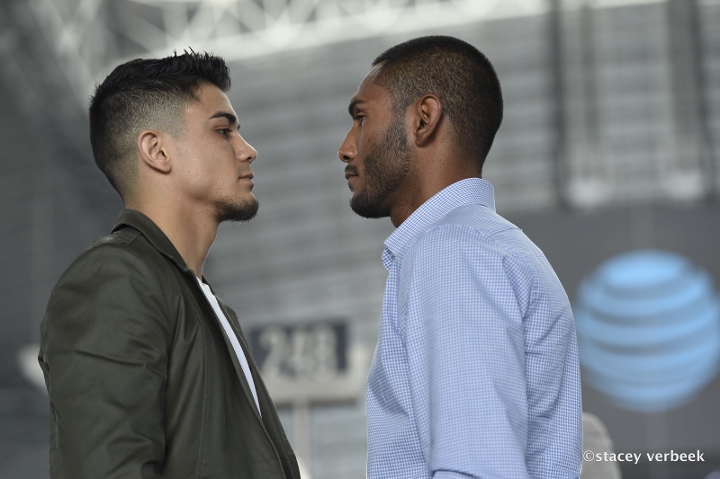 Diaz’s eagerness is more so to win his first major title as a pro, although it doesn’t hurt that he owns a win over Cancio (21-4-1, 16KOs). The two collided in Sept. 2016, with Diaz winning by 8th round knockout which at the time appeared to be just another fight in his run as a rising undefeated featherweight contender.

For Cancio, it meant the end of the line as he decided to walk away from the game. The Blythe, Calif. native ditched his boxing gloves and took on full-time work as a construction technician for Southern California Gas Company, where he remains gainfully employed even after returning to the sport last year and currently serving as a 130-pound titlist.

Diaz’s career hasn’t quite garnered the same feel-good story. His first bid at a major title resulted in his lone career defeat, dropping a competitive but clear decision to featherweight titlist Gary Russell Jr. last May. He’s since managed three straight wins, his last two coming at 130 pounds after missing weight in a non-title win over Jesus Rojas last August.

Following a 7th round stoppage of Freddy Fonseca this past May, the 26-year old southpaw from Southern California sought to secure a title fight for his next ring adventure. His intended target, Tevin Farmer remains burdened with a mandatory title defense, as does Cancio who will head into his second straight rematch versus Rene Alvarado, whom he bested by 8th round stoppage in their Dec. 2015 battle.

“It’s unfortunate that he has the mandatory versus Rene Alvarado first,” notes Diaz, who still hopes to return in the fall, although a title opportunity would trump ring activity. “I felt like Machado was a little too weak at 130, he’s just a little too fragile. I feel like (Cancio’s) shots won’t be as effective against me. I’m a lot stronger.

“I’ve seen a lot of weaknesses, but I’ve also seen a lot of great things added to his arsenal. He used to want to pick his shots. Now he throws punches in bunches which confuses his opponents. He had Machado confused, really, really confused from the get-go.”

Many will argue that it’s a new and improved Cancio, who has returned with renewed confidence. The working class hero looks like a completely different boxer than the journeyman he was perceived to be even as recent as heading into his first fight with Machado earlier this year.

Diaz is among the believers, but not to where he sees a rematch playing out any different than was the case three years ago.

“Once he faces me, you guys are going to see me pick apart those flaws,” insists the streaking contender. “I don’t want to talk about them out loud right now, because he’ll go fix them in training camp. You will see on fight night.”