Genuine regional attractions don’t come by the dozens in the current boxing landscape. Top Rank has done a fine job guiding 2012 Olympian Jose Ramirez into being one in the Central Valley of California. Whether he can further transform in a genuine national or global superstar remains to be seen.

He makes the kind of fights that can get him there.

So far, all Ramirez has done is win but the violence in his fights is a bit of an insurance policy against defeats when they come. Given his age, the trick will be threading the needle against defeat until the insurmountable pays best.

Jose Zepeda is the kind of challenger who will make that process fun. ESPN (Sunday, 7 PM EST) has the best main event of the weekend on paper because this should be a real fight. Ramirez has stepped up his opposition in his last two fights and Zepeda sits right near the level of foes Amir Imam and Antonio Orozco. Both those wins were impressive for the maturing Ramirez but neither were easy.

This probably won’t be either. 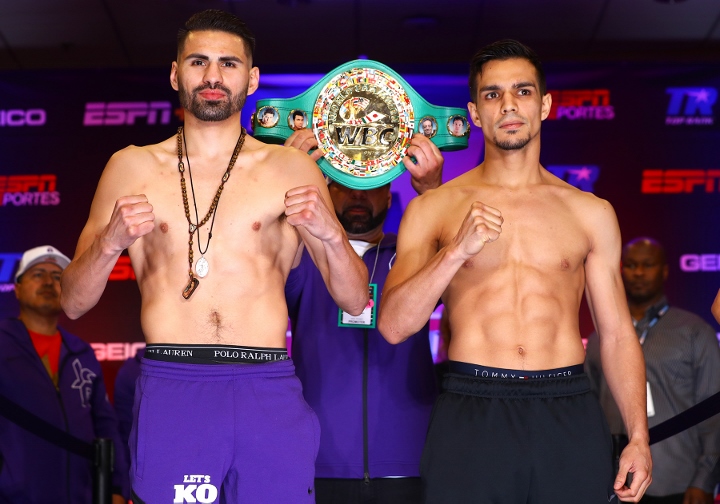 The Case for Ramirez: Ramirez has shown real development in his last two fights. Both fights were competitive but they were also decisive in Ramirez’s favor. The long limbed Ramirez is big for his division and has shown ability at range and inside. He’s an excellent body puncher and brings the right hand over the top with accuracy and snap. He’s not been a consistent, lights out puncher but his hands are heavy and he retains a knockout threat. While he’s attacking at close quarters, he keeps his chin tucked and guards to the body well. He’s more vulnerable from the outside but makes up for some of that with a long, stiff jab. Combining all those elements, Ramirez is a danger to physically overwhelm most of a division he’s likely to outgrow sooner than later.

The Case for Zepeda: Zepeda is patient, crafty, and dangerous enough to contain a more physical opponent. He will have some advantages defensively if he can keep Ramirez from setting himself for prolonged exchanges on the inside. Zepeda has good feet and slides away from opponents well, using southpaw angles to keep foes off balance. If Zepeda can frustrate Ramirez early, make him waste shots and think, his countering ability could pile up points and make rounds tough to score. His sneaky straight left to the body could also be a weapon in slowing the attacks of Ramirez if he can time it off the jab. While he’s been stopped once, it was on the basis of a bum shoulder so his chin, to date, has stood up.

The Pick: Zepeda has fought the bulk of his career at Jr. welterweight even if his previous title shot came a division lower. His level of opposition isn’t far removed from Ramirez’s and, on paper, this looks like a close fight. Working against Zepeda is Ramirez’s more consistent offensive output and the location of the fight. He’s going on to Ramirez’s turf and, in a fight that might have several close rounds where style preferences matter, the fan favorite perceived as making the fight could get some benefit of the doubt. Ultimately, there won’t be enough of those rounds to raise controversy. Ramirez will have to solve some puzzles but his body attack and physical strength will see him take over down the stretch and make this a close but fair decision by the end.