Jose Ramirez: I Learned So Much Working With Pacquiao, Cotto

Jose Ramirez does not miss those 100-degree days working alongside his father in the agricultural fields of California's San Joaquin (Central) Valley.

It is a part of who he is and what he represents. Those long hours under a grueling sun, accompanied with the heat made him mentally strong to face any and all of life's challenges.

Ramirez will hope to fulfill his lifelong dream of winning a world title belt and bring with it respect to an area that is sometimes overlooked by politicians and the general public. 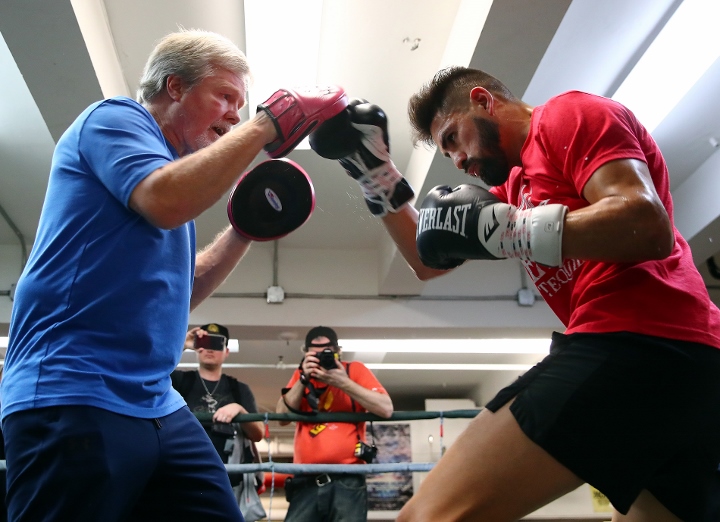 Ramirez will face Amir Imam in a 12 round bout for the vacant WBC junior welterweight title inside The Theatre at Madison Square Garden in New York City. The bout will headline a three-bout ESPN telecast (8 p.m. ET/ 5 p.m. PT).

Since signing with Top Rank out of the 2012 Olympic Games in London, Ramirez has been brought along through the credible matchmaking of the promotional company. But Ramirez has improved his skill-set and with sparring some of the best fighters in boxing, including Manny Pacquiao and Miguel Cotto.

Ramirez (21-0, 16 knockouts) is trained Freddie Roach, who has trained Pacquiao and Cotto.

"I learned so much sparring and working with those two great fighters," Ramirez told BoxingScene.com over the phone. "You learn to appreciate their skills and you push yourself just like they do during training. They're world champions for a reason. They get to the gym early. They're very professional."

"I was 21 years old when I went to the Philippines to spar 58 rounds with Manny Pacquiao. You see yourself improving and it brings a lot of confidence knowing where you are now as a pro, thanks to what you learn in the gym and sparring."

Ramirez last fought on Nov. 11, knocking out Mike Reed in the second round. The fight took place before a near-sellout crowd at the Save Mart Center in Fresno, not far from his hometown of Avenal.

Thanks to Top Rank and local promoter Rick Mirigian, Ramirez has enjoyed a large fan-base in the area.

Ramirez may be fighting about 3,000 miles away from his hometown, but he knows the support he receives is important and well-received, wherever he fights.

"I do have California in my mind even though I'm here in New York City," said Ramirez, who also attends California State University, Fresno. "I'm just a kid from Avenal and I know if you want to be a superstar in the sport, you have to fight on different stages. The support I've received from people back home and boxing fans everywhere while I've been here the last couple of days have been motivating and great."

Outside of the ring, Ramirez has been a vocal advocate for farmworkers' rights. He has traveled to Sacramento to speak on behalf of growers receiving more water stored in reservoirs during California's well-documented droughts.

"No water means none of the those in the fields can work," Ramirez said during an interview a few years ago.

Ramirez hopes winning a world title belt can bring more positive news to an area that relies heavily on agriculture, especially during the political climate the country is currently in.

He hopes to inspire many more to fulfill their dreams, in or out of the ring.

"I look back to where my life was and I'm happy with the ways it has played out, especially in the ring. As a five-year-old kid who got into boxing, I visualized it, but I never envisioned where my path took my to a world title shot. It's amazing where my life was growing up, from working through the fields to walking on the streets of New York City during the last couple of days."

Ramirez hopes to take the world title belt back to the Central Valley after tonight. The path towards the world title can be written in a book or made into a movie, but there are several chapters to write.

Ramirez is taking it all in.

"It means a lot when people come up to you and say that you inspire their kids to do better in school or to take up boxing. I know they're here in spirit supporting me. My Dad, my son, brother, his wife, a few close friends are here to support me and I'm grateful."

"I'm more motivated to fight for a world title belt. I'm pushed myself like never before. I'm really going to enjoy the moment fighting on ESPN."

[QUOTE=AdonisCreed;18580775]"I'm just a kid from Avenal and I know if you want to be a superstar in the sport, you have to fight on different stages." Just a kid??? Dude you're 25 years old lol hahaha With that said I…

Imams a tall lanky guy, no small task for any fighter. With that said, win or lose (hopefully win) Ramirez is just the kind of Guy Mexican and Mexican American kids and communities should look up to. With an Education…

"I'm just a kid from Avenal and I know if you want to be a superstar in the sport, you have to fight on different stages." Just a kid??? Dude you're 25 years old lol hahaha With that said I…

[QUOTE=lopez36;18580556]i hope jose wins,,i want to see him agains prograis[/QUOTE] That's the fight at 140 I wanna see. Fully expect jose to beat him and hopefully get that fight next

i hope jose wins,,i want to see him agains prograis