John Molina: We Knew We Had To Outwork Provodnikov To Win

The expected war that was expected between Ruslan Provodnikov and John Molina never materialized.

What might have been the bigger surprise was Molina sticking to his game-plan of using his jab and outboxing Provodnikov, especially during the second half of the fight.

Molina pulled off the upset, winning a 12 round unanimous decision over Provodnikov at the Turning Stone Resort and Casino in Verona, N.Y.

The fight did not produce the war many boxing insiders predicted, and nowhere near the war Francisco Vargas and Orlando Salido gave boxing fans last Saturday night at the Stubhub Center in Carson, Calif.

Provodnikov entered Saturday's bout as a prohibitive favorite, even though Molina had the height and reach advantages. Provodnikov has been in numerous wars over the last few years against the likes of Timothy Bradley, Mike Alvarado, and, most recently, Lucas Matthysse.

Provodnikov has not fought since November 7, when he stopped Jesus Alvarez Rodriguez in the fourth round.

Molina snapped a three-bout losing streak in his previous fight, stopping Jorge Romero in the third round on November 28. 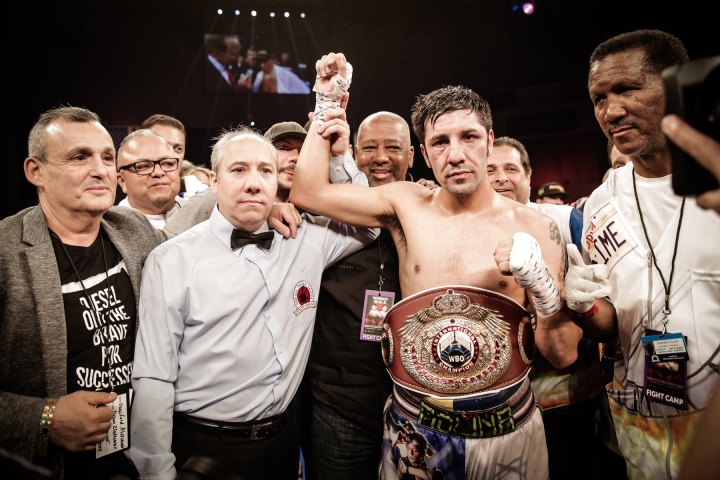 As the bout progressed, Molina created space between himself and Provodnikov. He was able to keep Provodnikov honest by peppering repeated jabs to the head, followed with right hands. As simple as those one-two combinations were to throw and land, it continued to work for Molina through the middle rounds.

Sensing he was down, and at the urging of trainer Joel Diaz, Provodnikov began to throw more punches. He was able to score more, but would leave himself open to be countered by Molina to the head.

Both fighters had their moments as the fight proceeded into the championship rounds. While Provodnikov was able to make an adjustment of keeping Molina in front of him, he did not carry over that sense of urgency.

That was evident in the 12th and final round. Molina outboxed Provodnikov or countered the Russian fighter in the final moments of the round.

Molina, who has worked with a handful of different trainers throughout his pro career, prepared for the Provodnikov fight with trainer Shadeed Suluki.

“We knew we had to outwork Provodnikov,” said the 33-year-old Covina, Calif., native.  “It was a fight that we needed.  Ruslan Provodnikov is a very notable name.  He’s a tough, tough guy.  He kept moving forward.

“People don’t realize I had my amateur career in the pros, and now it’s my time to step out and shine.  I have a new trainer.  Shadeed (Suluki) showed me how to throw punches and use my power.”

“I think it (the scorecard) was self-explanatory.  A fighter knows when they won a fight.  I won that fight and it was going to be hard to take it away from me.”

Molina seems to be back in the junior welterweight mix, but one wonders how long the Southern California-based fighter will fight at the weight while there could be more-lucrative bouts at 147 pounds.

As for Provodnikov, the loss hurts in many ways. Saturday was Provodnikov's first fight on Showtime, and there is no clue whether he would appear on the network anytime soon.

Provodnikov admits he would have to assess his career going forward, but claims he was not at his best Saturday night.

"Molina was the better man tonight," said Provodnikov, who is promoted by Banner Promotions. "I could not find the hunger for tonight's fight."

Junior middleweight Demetrius Andrade dominated Willie Nelson throughout 11-plus rounds, eventually stopping him in the 12th round.

It was Andrade's first fight since October 17, when he stopped overmatched Dario Fabian Pucheta in the second round. The Pucheta fight was the first since stopping Brian Rose in June of 2014. It would be the last time Andrade would defend the WBO title, as he was stripped for inactivity, reportedly due to promotional issues.

Nelson entered the fight having won his previous two fights.

The southpaw Andrade drew first blood in the opening round, dropping Nelson with a counter right cross to the head. Nelson was able to make it out of the round.

Nelson rallied during the next round, landing a series of uppercuts, but Andrade controlled the tempo of the fight, consistently beating Nelson to the punch.

As the bout progressed, Andrade began breaking Nelson down. Nelson's face was noticeably bruised from the number of punches that connected from the assertive Andrade. During the second half of the fight, Nelson seemed to only want to load up with one punch.

The end became apparent at the end of round 11 when Andrade dropped Nelson with a barrage of punches. While Nelson was able to make it out of the round, it was only a matter of time that Andrade was going for the kill in the 12th round.

Andrade dropped Nelson about a month into the 12th round, courtesy of another barrage of punches. Nelson got up on wobbly legs, eventually dropping again to the canvas with another series of blows from Andrade. Referee Dick Pakozdi waved the fight over at 1:38.

In the opening bout of the Showtime broadcast, Dejan Zlaticanin stopped Franklin Mamami in third round to win the vacant WBC lightweight title.

Zlaticanin, who became the first world champion from the country of Montenegro, was the longtime mandatory challenger to face Jorge Linares, but Linares was stripped of the WBC title in February when he was unable to defend the title because of a fractured right hand.

Zlaticanin was originally scheduled to fight Emiliano Marsili, but the fighter from Italy withdrew from the fight because of a reported fever and stomach ailments.

Within the first 30 seconds of the fight, Zlaticanin hurt Mamami with a left hand to the temple. Mamami was able to recover and fought back, but Zlaticanin was the more-effective fighter.

Zlaticanin hurt Mamami with another left hand to the temple about 30 seconds into the third round. Mamami tried to hold on, but Zlaticanin pinned the Bolivia fighter, landing a barrage of punches. Referee Charlie Fitch saved Mamami from further punishment, stepping in and stopping the bout at 54 seconds.

That was a great slugfest, great win for Molina, I'd like to see him fight Burns or Figueroa next.

Bad after fight interview Ruslan seems to have lost spark fire killer instinct. Seems lethargic with his desire to be the champ. His chin is still solid but his spirit seems gone. Had multiple trainers so it's him. Has to…

Ruslan still has no D. Unless he develops a Frazier style, early Tyson style, or a crouch he will always be outboxed by any decent and elite fighter. He does not have 1 punch ko power he has to out…

Great win for Molina obviously, but strangely, Provo would probably steamroll Adreem Bonehead and get a good W... get his spirit back. That would be almost like a Maidana II.

Fair play to Molina. I didn't expect him to use the jab so effectively to halt Ruslan's attacks. Wasn't shy letting his hands go either. Good job.