Provodnikov started coming forward, as expected, and Molina was moving and doing more boxing while picking his shots. They were brawling with huge shots at the start of the second. Molina went back to moving and boxing by the end of the same round. Molina was jabbing and staying at the distance in the third, while landing some big shots.

The action was fought on the inside with both fighters landing some big shots on the inside in the fourth.  Provodnikov suffered a cut from an accident clash of heads. They continued to trade in the fifth, but it was Molina who had the edge with the hard punches he was landing. Molina continued to stay at the distance during the sixth and landing long shots and jabs.

Provodnikov was finally able to buckle Molina in the sixth. It didn't stop Molina from closing the round strong. Molina was boxing smart in the seventh, landing hard shots and using his jab to set things up. Provodnikov was pressing at the start of the eight, landing some good shots as Molina too his foot off the gas. Molina was using his boxing to trouble Provodnikov, who continued a very steady pressure pace and kept up the same effort in the ninth.

Molina kept a distance in the tenth, using his jab and boxing with a focused effort. Provodnikov was kept at bay and wasn't very active with his punches. In the eleventh, it was Provodnikov who was boxing and picking his spots and it seemed to confuse Molina. At the start of the twelfth, they were once again trading big shots. Each fighter had his moments with their hard punches landing often, but Molina landed more and finished better. 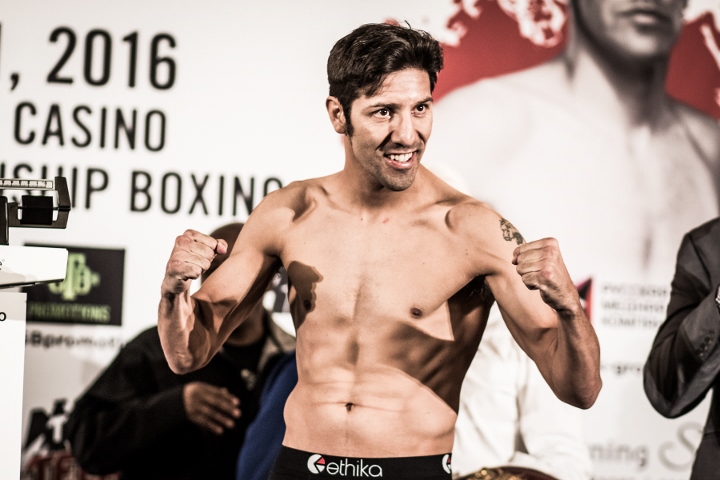 Andrade was very aggressive in the first round, decking down Nelson with a hard counter right hand. Nelson beat the count and took some punishment until the round. Nelson did his best to get back in the fight, but he was being dominated by the workrate and the power combinations that were raining down from Andrade.

At the end of the eleventh, Andrade once again decked Nelson with a hard counter hook. At the start of the twelfth, Andrade dropped him a third time and Nelson seemed to be spent at that point. Andrade decked him for fourth time after a barrage of punches and the fight was waved off.

Mamani was rocked at the start with big punches to the head and body. Dejan rocked him bad during the third round and then pounded him against the ropes until the referee jumped in to wave off the fight.

The full champion is Jorge Linares, who was out of the ring due to a fractured hand injury. He is ready to come back and will have to face Dejan in the near future.

[QUOTE=revelated;16781576]Lucas CLEARLY beat him. That one isn't eligible. [B]Algieri? That was a gift. And I'm an Algieri fan. Manny Pacquiao proved Algieri in no way should have gotten that decision and you know it. A guy gets knocked down, takes…

watch round 11, Provo can jab well and get into range much better using that than the high hands duck and hook strategy! I hate to see this big looping missed hooks, he has very decent pop and Molina had…

When Provodnikov got outboxed so badly by Matthysse I pretty much conceded this guy was a club fighter. I thibk Tim had such a hard time because he's so short like Ruslan, and he fought a stupid fight. These taller…

[QUOTE=ShoulderRoll;16780298]What ever happened to that other Rican that was training with Nacho?[/QUOTE] news to me ... who was that?