Facing a murderous puncher like John Molina is never an enjoyable task, but one of the few luxuries of facing him is that there isn't much mystery in what his game plan on fight night will be.

The same can be said for Molina's opponent on June 11, as he faces Ruslan Provodnikov in an action fight fan's dream matchup from the Turning Stone Resort and Casino in Verona NY, aired live on Showtime.

While Provodnikov is more of a prototypical pressure fighter and volume puncher, Molina is a bomber, plain and simple. He might not throw quite as many punches as his rugged Russian opponent, but everything he throws is with ill intent, to the point of being reckless. In order for that style to be effective, you either need to track your opponent down, or he needs to cooperate and stand in front of you. 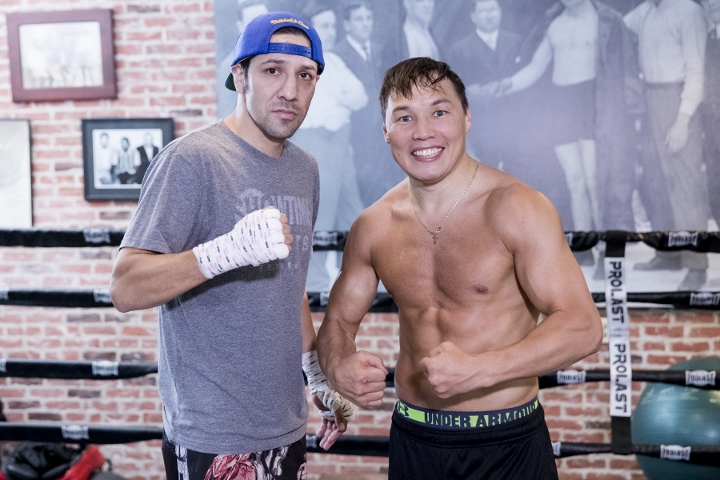 Lucky for Molina, he shouldn't have to go far to find Provodnikov.

“In a perfect world, I'd have a guy like that exchange with me,” said Molina. “For my style of fighting, we don't have to want to go find somebody. We want him to stand in front of us. And we think if push comes to shove that Ruslan is going to be Ruslan and sit down and fight with me.”

Two fights ago, Molina was in the biggest fight of his career against Adrien Broner in the debut of the Premier Boxing Champions series on NBC. Broner cruised to a unanimous decision, and the Covina, California native was displeased with how little The Problem wanted to exchange.

Most fans probably shared in his opinion as well. Of course, there are those who appreciate sublime, slick boxing. Anyone who watches the sport on a regular basis has an understanding of the skill needed to operate in such a manner. But still, the most naturally aesthetically pleasing fights, the ones that appeal to our primal instincts, are still slugfests. In Molina-Provodnikov, Showtime boss Stephen Espinoza saw an opportunity to all but guarantee fans one of those.

“In terms of programming the network, we try to have a variety of fights on. Some really skilled guys, some who are big punchers, a variety of weight classes. Different types of fighters,” said Espinoza. “This is one where again, it's not about titles, it's not about anything but two guys who fight really hard and give it their all, meeting in the ring to find out who's the better man on that night.”

Perhaps it's the residual effect from the Broner fight, but Molina remains just the tiniest bit skeptical that someone is willing to stand and trade with him. Or maybe it's because he knows what his punches can do to people, and doubts that anyone would willingly walk into that fire.

“Ruslan and his team have been around the game a long time, they know that I'm a puncher. I anticipate Ruslan doing what he does best, which is sit there and fight, but I also anticipate him using some of his boxing ability from his amateur pedigree and his experience in the pro game,” said Molina.

In all likelihood, Molina's first instincts are correct. Ruslan won't be going anywhere but forward. And neither will he.

[QUOTE=Vicious.;16757586]Ruslan is also a punching bag. Thats why i said diaz might/should change his approach to this fight. "Intelligent pressure"? Yeah when has provo ever attepmted intelligent pressure? Thats what diaz might help him do.[/QUOTE] By "box a lil more",…

Whaaaaaaa? Stand and trade? I thought Ruslan was going to be a defensive specialist, pot shot, tie up and bore us with a decision. Obviously those that don't like that don't know boxing.

[QUOTE=mathed;16757514]Fight looked staged as hell. Hymie made him sacrifice one fight in order to earn others.[/QUOTE] i agree, looked really weird. plus, he was coming from losing to sotto, and he threw more in that fight too

[QUOTE=kiaba360;16757555]If he's a punching bag, then Ruslan shouldn't have to change up his style. Ruslan should be looking to get on the inside since he has the shorter arms. Intelligent pressure and infighting is all he needs.[/QUOTE] Ruslan is also…

[QUOTE=Vicious.;16756300]Doubt Diaz will let provo fight like that. Lets see if ruslan is smart and disciplined enough to box a lil more. Molina is just a straight punching bag but lets see if provo tries a different approach[/QUOTE] If he's…