Joet Gonzalez Warns: Stevenson Will Pay For The Things He Said!

Joet Gonzalez would love nothing more than to win a world title belt and put a beating on Shakur Stevenson in the process.

Can he do both while keeping a level head and not let his emotions get the best of him?

That will remain to be seen tonight as Stevenson is the only thing that separates him from a world title belt. The 12-round bout will take place at the Reno-Sparks Convention Center in Reno, Nevada.

The fight will follow the 10-round bout between bantamweights Joshua Greer and Antonio Nieves. Both fights will stream live on ESPN+ (10 p.m. ET/ 7 p.m. PT). 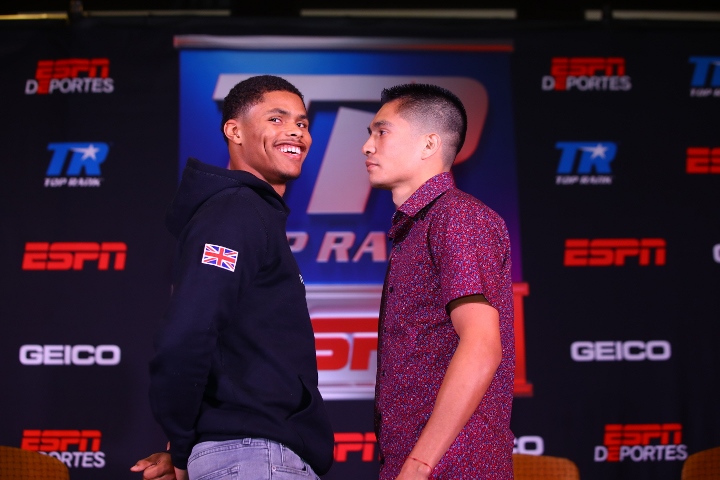 Gonzalez (23-0, 14 knockouts), who resides in the Los Angeles suburb of Glendora, will be fighting for the vacant WBO featherweight title, which was relinquished by Valdez during the summer. Gonzalez earned his number two ranking after knocking out Manuel ‘Tino’ Avila in his last bout on July 13.

During the post-fight interview, Gonzalez made a reference about family, a jab at younger sister Jajaira, who was an amateur star who did not qualify for the 2016 Olympic Games in Rio de Janeiro. Blame for the missed opportunity was put on her relationship with Shakur Stevenson, who she met at the U.S. Olympic Training Center in Colorado Springs, Colorado in early 2016.

What followed was a back-and-forth between Gonzalez and Stevenson on social media, and a press conference weeks later where the tension was very evident with both.

The 26-year-old has done his best to keep a straight-face on the issue, but the stinging words of Stevenson along with the repeated questions from the media have caused Gonzalez to be more vocal and assertive in the weeks leading up to tonight’s fight. Gonzalez also believes he has had the harder road to get to a world title fight, while Stevenson only took less than three years after turning pro and about half the pro fights of Gonzalez to get the same position.

"I most definitely had the harder road,” said Gonzalez at Thursday’s press conference. “He was an Olympic silver medalist. He got the fast track. He got (a title shot) in two years. It took me seven years. I've been pro since 2012, so I've had the longer road. I have more experience. I'm older, more mature, and I think that is going to help me out Saturday night."

"His biggest test, as a pro or an amateur, is obviously for a world title. He's gonna have to do some crazy thing to beat me because I'm not leaving Saturday without that belt."

Gonzalez, who is promoted by Golden Boy Promotions and managed by Frank Espinoza, has proven his worth in recent fights, fighting more aggressively and assertively. He has stopped eight of his last nine opponents.

Because of the fallout with Stevenson, Gonzalez may come out with more of a purpose to knock him out. That could work against him, but Gonzalez believes his training, poise and maturity will be the x-factors that will lead him to victory.

That is not to say Stevenson’s comments have not motivated him to train harder and fight with more of a purpose tonight.

"It fuels me because I was never the one to put this out there. The media, the public, they found out because of him. Just running his mouth. And now when they ask him about it, he don't want to talk about it.”