LAS VEGAS – Joet Gonzalez got the sense during negotiations that Shakur Stevenson didn’t want comprehensive performance-enhancing drug testing prior to their fight.

According to Gonzalez, full testing by the Voluntary Anti-Doping Association was the final stipulation to which Stevenson agreed two weeks ago, just before their deal was finalized. Stevenson (12-0, 7 KOs), the WBO’s No. 1 featherweight contender, and the second-ranked Gonzalez (23-0, 14 KOs) are set to fight October 26 in Reno, Nevada, for the WBO’s unclaimed 126-pound championship.

“The VADA testing was another thing I wanted,” Gonzalez told BoxingScene.com. “That was the biggest hurdle from his team. He didn’t wanna do the testing, until finally they decided to do it the last day, which was I believe the 6th of September, that Friday, to get the deal done, before it went to purse bid. That was another big thing. I don’t know why he didn’t wanna do the testing. They wanted to do it where we fight and then we do a test, then and there, after the fight. But he didn’t wanna do the full VADA testing. But at the end he finally agreed, and the fight got done.” 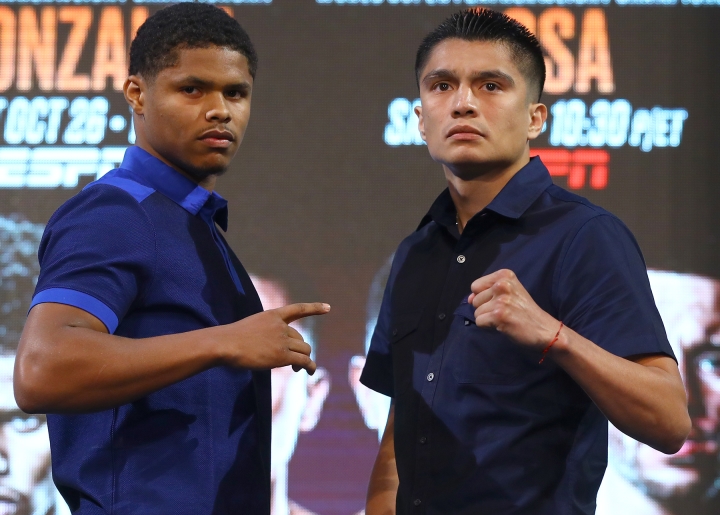 Carl Moretti, Top Rank’s vice president of boxing operations, informed BoxingScene.com that Stevenson never hesitated to submit to random blood and urine testing by VADA in advance of his fight against Gonzalez. Top Rank, Stevenson’s promoter, handled his negotiations for this fight with Golden Boy Promotions, which represents Gonzalez.

“Testing was at no point an issue for Shakur,” Moretti said. “He has been enrolled with VADA since August 1st.”

All WBC champions and top-15 contenders must submit to VADA testing as part of the sanctioning organization’s “Clean Boxing Program.” The 22-year-old Stevenson, of Newark, New Jersey, was rated within the WBC’s top 15 at featherweight at the time of his enrollment, but he is no longer ranked by the WBC.

The WBO doesn’t have a PED testing program similar to the one required by the WBC.

Full PED testing has hardly been the biggest issue between Stevenson and Gonzalez leading up to their fight for the featherweight title Oscar Valdez vacated to move up to the junior lightweight division.

ESPN+ will stream the Stevenson-Gonzalez fight as the main event of a card from the Reno-Sparks Convention Center.

Gotta appologize for comments after a bad cup of coffee and on a bad note. If Stevenson is everything he's showing then best of luck and I'd be fortunate to see him succeed. Entourages however are only a distaction or…

[QUOTE=Boxing Hero;20071050]I wonder why Stevenson has never start it doing 24/7 VADA Testing. This is not the first time someone accuses him of not wanting drug testing.[/QUOTE]lomo doesn't test either all of bobs guys are like that

[QUOTE=Vodkaholic;20071324]Another AA refusing vada testing. Yet dem rushians and euros be on peds doe[/QUOTE] Let me guess you mad blacks win a lot and east euros only have like four champs

[QUOTE=Vodkaholic;20071324]Another AA refusing vada testing. Yet dem rushians and euros be on peds doe[/QUOTE] Let me guess you mad blacks win a lot and east euro