Joet Gonzalez: I'm Going To Do Everything In My Power To Stay Active

Make weight, get back in the win column and then map out a course that would lead to a second run at a major title.

Joet Gonzalez had it all figured out—only to be told to shut it all down.

“I’ve had to deal with last-minute delays before, but this is a first,” Gonzalez (23-1, 14KOs) told BoxingScene.com of his planned March 19 fight which never saw the light of day. “I’ve had situations where my opponent missed weight and I couldn’t fight, but my promoter (Golden Boy Promotions) and manager (Frank Espinoza) would get me back in the ring right away.

“This is different. We’re all just waiting to find out when we can fight again.” 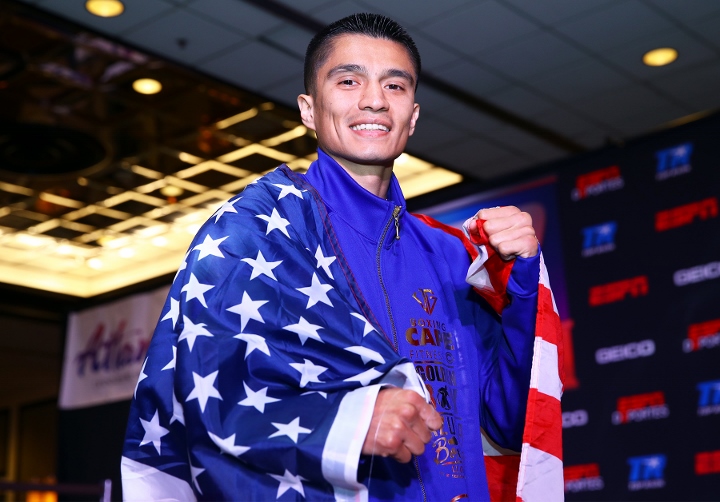 Gonzalez was deep in training for a planned featherweight clash versus former title challenger Chris Avalos, to have streamed on DAZN live from The Avalon in Hollywood, California. It was to be the first fight back for the Los Angeles native following his lone career defeat, a 12-round loss to Shakur Stevenson in their vacant title fight last October.

Everything was going well in camp, until boxing events around the world were being pulled from the schedule in the wake of the growing coronavirus disease (COVID-19) pandemic. Shows in the United States were still up in the air, with some promoters seeking avenues to still proceed even if it meant staging cards that were closed to the public.

The decision eventually became easy for Golden Boy Promotions, as the California State Athletic Commission (CSAC) called for the cancellation of all in-state combat sports events through the end of March. Two Golden Boy shows fell under that ruling, including Gonzalez’s planned headliner. From there came a greater fallout, as most of the free world has been forced to alter their everyday lifestyle.

“The good part of it is, I’m spending more time with my family and doing the little things we never get to do,” notes Gonzalez. “Not being able to fight, that obviously hurts. The first week was the toughest to adjust. Like, last Wednesday in my mind I was supposed to weigh in. On Thursday, all I could think about was ‘I’m supposed to be fighting right now.’

“Then, getting used to a new routine for staying in shape. I can’t go to the gym because California is under mandatory lockdown. So it becomes doing the same exercises every day, doing road work and trying to find new trails—only to find out they closed those roads down. But we’re all in this together. We just have to accept it and be patient.”

Of course, that changes once the sport gets the all clear to resume business.

“I’m just going to wait on Golden Boy and Frank Espinoza to let me know my next move,” admits Gonzalez. “But, our show was the next on Golden Boy’s schedule. So, hopefully, I’m one of the first ones up once we all come back.

“Other than that, I’m just going to do everything in my power to stay active. Wherever and however fights need to happen, I want to stick to my plan for this year. Get this first fight back whenever it is, and then from there whatever it takes to get in position to become world champion.”