Smith and Alvarez were supposed to headline an ESPN show July 16 from MGM Grand Conference Center in Las Vegas. Their fight was postponed late in June because Alvarez suffered an injury to his right shoulder while training.

“We’re hoping it’s rescheduled for the end of August,” Joe DeGuardia, Smith’s promoter, told BoxingScene.com. “I loved the fight for July 16th. Joe was raring to go, ready and mentally really, really focused. He’s gonna have to get there again. But Joe is a warrior. Whenever we get it rescheduled and get that precise date, he’ll have to get himself back and ready. And I’m sure he will.” 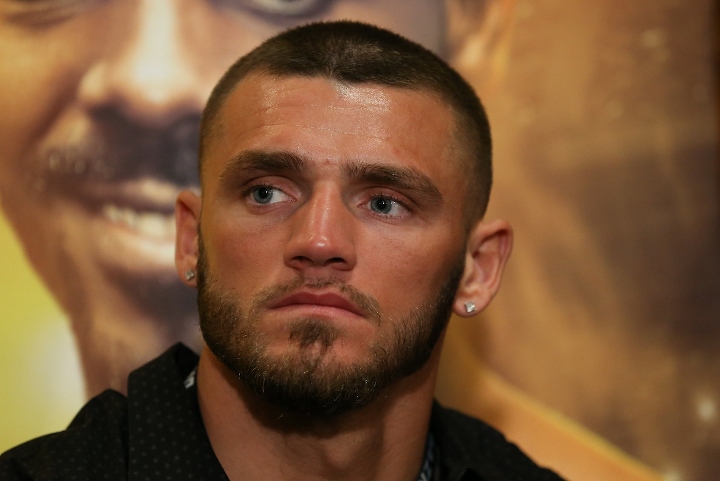 Bob Arum, Alvarez’s co-promoter, told BoxingScene.com on Wednesday that Alvarez has been cleared to box by the third week of August. The Nevada State Athletic Commission has approved the dates of August 20 and August 27 for Arum’s Top Rank Inc. to hold cards at MGM Grand Conference Center in Las Vegas.

Smith (25-3, 20 KOs), of Mastic, New York, and Colombia’s Alvarez (25-1, 13 KOs) are supposed to fight as part of the WBO’s light heavyweight elimination tournament. The Smith-Alvarez winner is expected to face whoever emerges victorious from the Umar Salamov-Maksim Vlasov fight for the vacant WBO 175-pound championship.

Russia’s Salamov (25-1, 19 KOs) is ranked number one in the WBO’s light heavyweight ratings. Russia’s Vlasov (45-3, 26 KOs) is rated second by the WBO, one spot ahead of Alvarez and two spots atop Smith.

Canelo Alvarez gave up the WBO light heavyweight title after he knocked out Sergey Kovalev in the 11th round to win it November 2 in Las Vegas.

“You’d have this good-looking, Irish New Yorker who’s got that union backing and got the punch that makes him exciting. And albeit a quiet personality, he’s got a personality that people love, that hard-working common man theme to him. I think he could rise to tremendous levels in the light heavyweight division, particularly with his fan base.”

It would not take much for Jr. to be more then a one sided fighter but he has never shown any interest in doing that. Why? I do not know. I still enjoy his fights but I do agree he…

Any solid boxer (like Alvarez) is going to be a handful for Joe. Hopefully he can get some better training/sparring in for this one. He'll always have the power to lean on, but catching Alvarez is never easy. Solid puncher…

Joe Smith Jr. fight would be a good fight as would the rest of the set up for the Light Heavy Divison nothing is solid right now to my way of looking at it but its fights that would lead…