"This is one of those high energy shows that promises action from top to bottom. Jesse Vargas is one of the toughest welterweights in the sport. He always comes to fight and doesn't disappoint,'' said Tom Brown, President of TGB Promotions. "His match against Herrera should provide the kind of action and entertainment that his fans have come to expect from him. Jamal James is stepping up to another level and will be tested by Diego Chaves, a rugged veteran who has been in against some of the best in the division. And you know that Molina and Redkach are going to trade shots. It promises to be entertaining for the fans at Pioneer Event Center and those tuned in on FS1 and FOX Deportes.'' 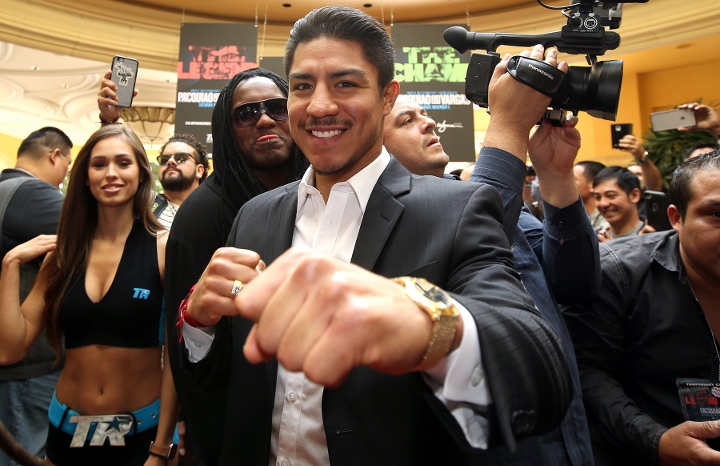 Tickets for the live event begin at $30 and are on sale now. To purchase tickets visit the Pioneer Event Center's website: www.uavpec.com.

Vargas (27-2, 10 KOs) is returning to the ring for the first time in 13 months after dropping a 12-round decision in a welterweight title defense against Manny Pacquiao on Nov. 5, 2016. The 28-year-old Vargas, who was born in Los Angeles and now lives in Las Vegas, won the welterweight title with a technical knockout victory over Sadam Ali on March 5, 2016. His only other loss came against former welterweight champion Timothy Bradley and he owns victories over the likes of Antonio DeMarco, Josesito Lopez, Aron Martinez and Wale Omotoso.

"Every fighter is dangerous and if I give Herrera the chance, he'll knock my head off," said Vargas. "But I come into every fight with bad intentions and I'm in a position where I know exactly what it takes to get where I want to go. I have a lot of opportunities ahead of me, but first, I have to show the fans that I'm back and look exciting while doing that. Herrera is going to give me his best, but I feel that I have the speed, the experience and the game plan to overcome anything he brings to the table."

Herrera (33-7-1, 22 KOs) has already fought four times in 2017 including his most recent outing, a stoppage of Israel Toala in July. The 28-year-old from Merida, Yucatan, Mexico lost to Brandon Rios via knockout on June 11 in a FS1 and FOX Deportes main event at Pioneer Events Center, where he will face Vargas.

"I'm going against a really good fighter, but he doesn't punch very hard," said Herrera. "I will go bombs away from the first round. He can't hurt me. I'm confident I will win this fight. This is a great opportunity for me. I've got to start faster than I did against Brandon Rios and I can't take anything for granted. The fans will get a great fight and definitely be winners on fight night."

Chaves (26-2-1, 22 KOs) is a tough veteran who has faced some of this generation's best welterweights, including current unified welterweight champion Keith Thurman. The 31-year-old from Buenos Aires, Argentina, has won three straight fights since battling to a draw against former welterweight champion Timothy Bradley in 2014 including his most recent triumph, a knockout victory over Jean Carlos Prada on June 17.

James (21-1, 9 KOs) is on the comeback trail after suffering the first loss of his career to Yordenis Ugas via unanimous decision on Aug. 12, 2016. The 29-year-old James of Minneapolis, Minnesota bounced back from that loss with a unanimous decision victory over Jo Jo Dan on July 15. James has fought on FS1 and FOX Deportes his last four times in the ring and has recorded three wins in that stretch.  Chaves represents a major challenge for James in his attempt to climb the welterweight ladder as he looks to add another name to his list of victories that includes Wale Omotoso, Javier Molina and Juan Carlo Abreu.

Redkach (20-3-1, 16 KOs) and Molina (29-7, 23 KOs) are both coming off losses and will look to go through each other to regain top contender status. The 31-year-old Redkach, who was born in Ukraine and now lives in Los Angeles, is coming off a split decision loss in a FS1 and FOX Deportes main event to Argenis Mendez in his last fight on May 2. Molina, 34, had one of the best performance of his career in June 2016 when he defeated Ruslan Provodnikov by unanimous decision. The Covina, Calif. native earned a shot at Terrence Crawford in December that saw him lose by TKO in the eighth round.

[QUOTE=MasterPlan;18221273]Horn is not with TR. And what happens after a Crawford fight ... I just looked at the top 20 rankings. The majority are with Haymon from the beltholders like Spence and Thurman. To the top contenders in Garcia a…

[QUOTE=jjsmyth87;18220795]He could have fought horn or crawford or any of the other top 20 at 147 who dont work with al Haymon. He ran scared to pbc just like mikey garcia and chavez jr. because he knows top rank would…

lol i had to look up who herrera was and seen hes ranked 219th on boxrec with 7 losses. what another fantastic pbc match up!!!! How the **** is this **** still running, the match ups are getting worse and…

[QUOTE=Shadoww702;18221064]Most of what he does is for TV. But you get another thug in the room then they both have to start whipping sht out see who is bigger. You know this game. Fake Blacks think louder is better when…