Jessie Vargas: No One Will Care About Broner After I Beat Him

NEW YORK – From Jessie Vargas’ viewpoint, he is in perfect position to render Adrien Broner irrelevant.

One more loss against a championship-caliber opponent, and Vargas figures even Broner’s biggest supporters will consider the former four-division champion completely finished as a true threat at boxing’s elite level. A Vargas victory on Saturday night would mean Broner’s three most recent fights resulted in back-to-back losses to Vargas and Mikey Garcia and a debatable split-decision win against Adrian Granados.

Broner belittled Vargas during a press conference Thursday in Brooklyn as if the former WBO welterweight champion isn’t on his level. Vargas visibly took offense to his opponent’s arrogance and promised to take it out on Broner during their 12-round, 144-pound main event at Barclays Center.

“I don’t really think much of him,” Vargas told BoxingScene.com following their press conference at Barclays Center. “I don’t think anyone will really care about him after I defeat him Saturday night.”

One of the most polarizing people in the sport appears to have arrived at the point, though, that he’ll have to overcome Vargas or risk becoming a glorified gatekeeper for up-and-coming opponents.

A belligerent Broner (33-3, 24 KOs, 1 NC) took exception during the press conference Thursday to the suggestion that he has been a less formidable fighter when he boxed above the super lightweight limit of 140 pounds. His emotional outburst notwithstanding, Broner’s bouts above 140 have resulted in two of his three losses, unanimous-decision defeats to Marcos Maidana and Shawn Porter, and less-than-convincing, split-decision victories over Paulie Malignaggi and Granados. 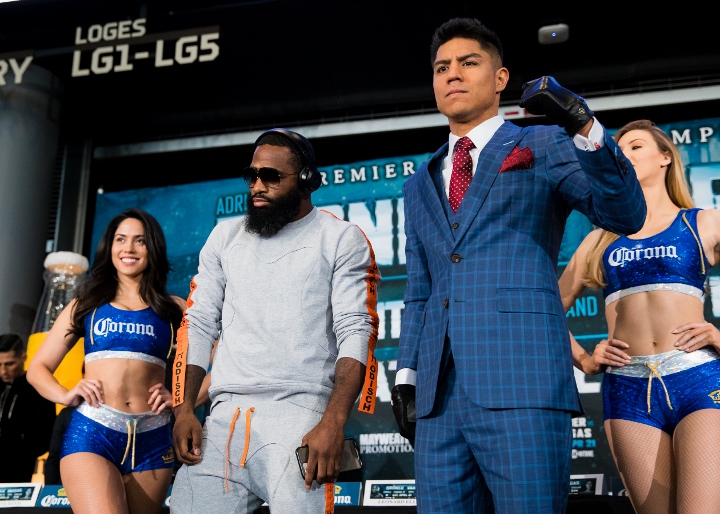 The Cincinnati native fared better at super featherweight, lightweight and super lightweight, lower divisions in which he hadn’t lost before the unbeaten Garcia out-boxed him, albeit against less imposing opposition. Against Las Vegas’ Vargas (28-2, 10 KOs), Broner will encounter a much taller, natural welterweight who assures anyone who’ll listen that his low knockout ratio is misleading.

Broner is four inches shorter than the 5-feet-10 Vargas, who expects to be not only bigger than Broner, but stronger.

As make-or-break as this fight seems to be for Broner, Vargas is in a similar situation. He, too, needs to produce a victory over a high-profile opponent to get back on the path toward a welterweight title shot.

The two biggest fights of Vargas’ 9½-year pro career have resulted in one-sided, unanimous-decision defeats to former WBO welterweight champions Timothy Bradley and Manny Pacquiao. A ninth-round stoppage of Sadam Ali, who Vargas beat to win the then-vacant WBO 147-pound title, is sandwiched between those losses to Bradley and Pacquiao.

But beyond beating Ali, Vargas also could be viewed as an underachiever whose resume doesn’t match what was expected of him once upon a time. That’s what makes their fight Saturday night so important for these 28-year-old former champions.

“It’s a big fight for both of us, I believe,” Vargas said. “The way I see it is it’s a good opportunity for both of us. No one wants to lose and, in this situation, that’s not even in the back of my mind. I’m only thinking about winning because of how I’ve prepared. I’ve just never felt this good. That’s why I know the result will be a victory.”

After agreeing to work with powerful adviser Al Haymon, Vargas envisioned his first big “Premier Boxing Champions” bout being a welterweight title shot, perhaps against often-injured WBA/WBC champ Keith Thurman. He never thought boxing Broner would’ve been a possibility, not until he received an unexpected phone call to replace Omar Figueroa Jr. (27-0-1, 19 KOs), who pulled out of his fight against Broner last month, reportedly due to a shoulder injury.

“I was very surprised that he took the fight,” Vargas said, referring to Broner. “I thought he wasn’t gonna accept it. Thankfully for me, he did, because it was a fight the fans would want, it was a fight the fans would be entertained by. He’s a talented fighter. I’m a talented fighter. It makes for a good matchup. But it’s a dangerous fight for him.”

Vargas and Figueroa have vastly different styles. Based on Vargas’ size, boxing ability and experience against top opposition, he could provide an even tougher test for Broner than the relentless but defensively deficient Figueroa might’ve offered.

Broner contends a switch to a more demanding trainer, Kevin Cunningham, has helped him prepare properly to neutralize anything Vargas can do. A very confident Vargas believes he could become the first fighter to beat Broner by knockout.

“This isn’t gonna be a close fight,” Vargas said. “I’m planning on dictating the pace and doing what I wanna do. I’m the better fighter all around. I have diversity in my style. I’m strong. I’m stronger than ever.”

While Broner is clearly considered the ‘A’ side of this promotion, handicappers have installed Vargas as a slight favorite as they head toward Saturday’s fight (-135/+105).

Vargas has knocked out only 33 of his opponents since he turned pro nearly 10 years ago and Broner is infamous for his low punch output. Nevertheless, Vargas is certain they’ll provide plenty of action in what will unfold as a fan-friendly fight.

“A lot of fans wanna see this fight,” Vargas said. “It’s gonna entertain the fans, which is the most important factor for me because that’s what I come to do. After I beat him, fans are gonna be happy with my performance. It’s gonna lead to bigger and better things. Hopefully, I can fight for the title right after this fight.”

[QUOTE=A.K;18687808]Broner got outclassed by Mikey he’s the superior boxer in this one[/QUOTE] Not only does the overrating of Garcia has to stop, people need to stop disrespecting Vargas, there skillsets are about equal...

[QUOTE=JakeTheBoxer;18687758]It seems that Broner and Khan are the best money makers and sellers in boxing. No matter how many times they lose, they still get nice paydays.[/QUOTE] To be fair, it's not like either guy has lost to bum opposition.

[QUOTE=Rip Chudd;18687765]:lol1: Article says Vargas has only knocked out 33 of his opponents since turning pro, dude doesn't even have that many fights. Do guys proofread this stuff before posting?[/QUOTE] I noticed that too! They forgot to add the %…

[QUOTE=AdonisCreed;18688328]Yeah I believe he'll get another chance look at all the opportunities Victor Ortiz has gotten and even Devon Alexander, Gabe Rosado, Lucas Matthyssee and Berto. Losses happen in boxing, Broner just needs to grow up more than anything.[/QUOTE] If…