Vargas just thinks the former four-division champion made an enormous mistake by choosing him as the opponent for Garcia’s second fight at the 147-pound limit. The former WBO welterweight title-holder stands five inches taller than Garcia and is certain that his power will be one of the deciding factors in their 12-round main event Saturday night at Ford Center at The Star, the Dallas Cowboys’ training facility.

“I’m gonna come to win and I’m sure he’s gonna give it his all as well,” Vargas told BoxingScene.com. “But I’m gonna make sure he feels my power. I’m gonna be the faster man and not only the faster man, but the stronger man. And I’ll make sure to use my intelligence, my ring IQ, inside the ring.” 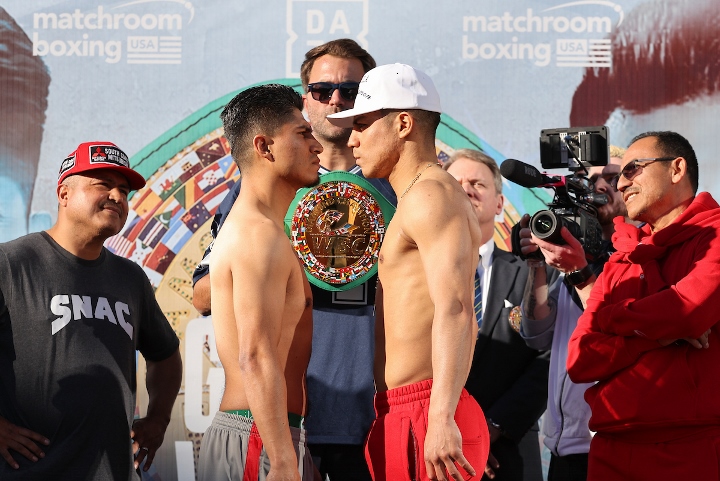 The 30-year-old Vargas has knocked out only 33 percent of his pro opponents. The 5-feet-11 Vargas has a significant size advantage, however, and has fought at welterweight for nearly five years.

The 32-year-old Garcia, meanwhile, hasn’t boxed in nearly a year.

In his last fight, Garcia’s welterweight debut, IBF/WBC 147-pound champion Errol Spence Jr. (26-0, 21 KOs) soundly defeated him in a 12-round bout. The bigger, stronger Spence won all 12 rounds on each judge’s scorecard last March 16 at the Cowboys’ AT&T Stadium in nearby Arlington.

Vargas suspects that the one-sided nature of Garcia’s loss to Spence has impacted his confidence about succeeding within the welterweight division.

“I’m sure he has his doubts on how he’s gonna feel fighting at welterweight again,” Vargas said. “But he decided to come back for his second fight at welterweight with the wrong fighter, and I’m gonna prove it come February 29th. He’s a good fighter. I take nothing away from him. I’m making sure I don’t underestimate him based on his size. But I’m coming in 100 percent. I’m strong, I’m fast.”

Yea I agree, it looks like it will be fixed, it will go to the cards and overhyped Mikey will get the nod. I think Mikey stood at 147 to get a fight with Manny. Garcia is all about $…

Don't know why Garcia is a favorite for this one. He show nothing against Spence at all. Vargas is a natural strong warior. Avoided by many fighter like the puertorrican garcia, porter and others s elf called best welters. Only…

If Garcia has something left, a TKO win for him is not out of the question and is in fact my pick.

I'm rooting for him. Hopefully his stamina doesn't betray him in the fight due to the weight cut like it did against Broner.