Former super bantamweight world champion Jessie Magdaleno (27-1, 18 KO’s). is ready to take on 2020 and beyond. We caught up with the 28 year old and asked him about his future plans.

What did you learn from your first career loss to Dogboe?

I learned that I didn’t really belong at that weight class. 122 is not for me. I was straining a lot to make weight and it showed. It was a set back but I had to go back to the drawing board. I met with my team and we decided that I should go up to featherweight and it was a good move. I feel a lot stronger.

What did you learn from your latest two wins against Ramos and Rivera?

I learned that I still have the passion and I got my confidence back. I feel like a brand new person with bigger goals and dreams at this new weight. At 122 I beat Nonito Donaire for the title and I plan to do other great things at 126. 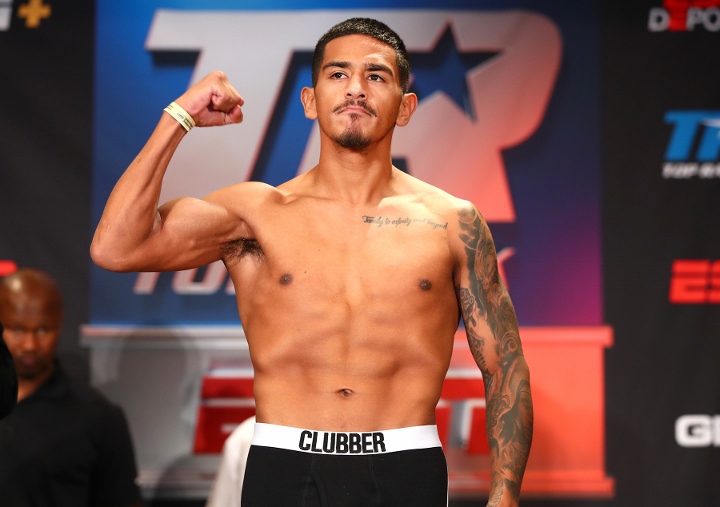 Who’s been the greatest influence in your life?

My father. He’s a hard working man. He’s shown all of us what hard work is and I respect him for what he’s done. He’s someone to look up to. He works ten times harder than me. He’s just a great influence and I get my work ethic from him.

Why are you a fighter?

I didn’t want to be a fighter. I really loved soccer and I wanted to be a soccer player. But my brother was boxing and my father put the focus on the sport so I fell into it. I wanted to make him proud and I ended up being good at it. It all had to do with my fathers influence.

What’s the toughest part about being a boxer?

The toughest part for me is the dieting. I’m a real foodie. I love to eat and there’s a lot of great Mexican food. It’s also hard being away from my family at training camp.

The best part is the fighting in front of a crowd and the energy you get from them. And the feeling of accomplishment when you win and score knock downs. I love to entertain the crowd. I love when I win. But winning something like a world title, well that’s the ultimate accomplishment.

What is your ultimate goal as a fighter?

Who’s your favorite fighter to watch?

Growing up I used to watch Mike Tyson, Juan Manuel Marquez and Naseem Hamed. I really like the variety of styles. Mike Tyson was a devastating puncher. Marquez was an amazing counterpuncher. Naseem Hamed had a really cool slick style that I used to try to imitate. To this day I try to imitate those styles when I can. As far as the current fighters, i’m a big fan of Floyd Mayweather. A lot of people don’t like him but he’s an amazing fighter and I enjoy watching him a lot. He’s a smart fighter and very complete.

What advice can you give to those young men who are thinking about becoming fighters?

If you have a dream don’t stop chasing it. It’s all about your mindset and finishing and accomplishing your goals. Whether it’s in boxing or anything else. You just have to continue pushing forward and following those dreams no matter what.

What message would you give to your fans?

I want to thank the fans for following me and sticking with me even after my loss. I’ve got a lot more to give. I have another world title that I plan to win. I plan to fight the best and I plan to always put on a show for the fans. I appreciate them so much.

What’s it like to be part of the Espinoza boxing organization?

There’s nothing better. The Espinozas are very involved with their fighters and Frank is more than a manager, he’s a friend, he’s a very supportive person with a great heart. I’m just happy to be part of the team. I think we’ll reach all our objectives together. 2020 is our year.