Mohegan Sun, CT. - In a unification clash for the WBC, IBF, WBA junior middleweight titles, Jermell Charlo (34-1, 18 KOs) knocked out Jeison Rosario (20-2-1, 14 KOs) in the eight round. Rosario had been down three times in the contest. 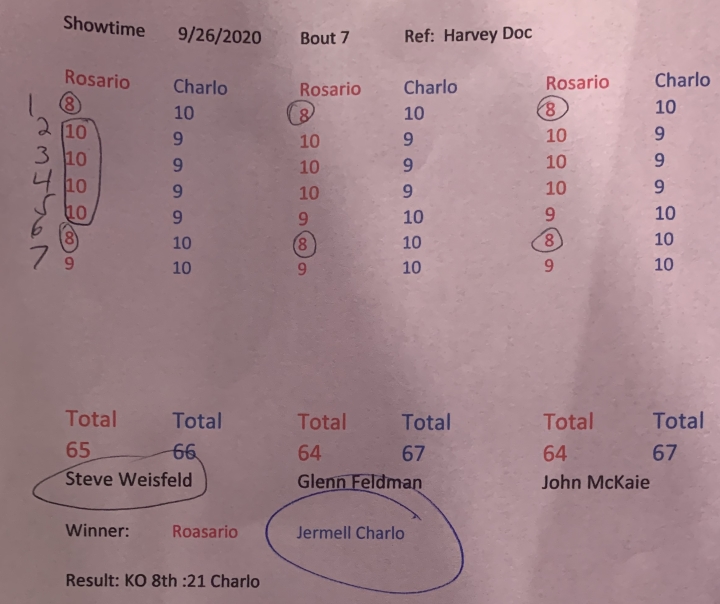 [QUOTE=daggum;20782256]was rosario even good? he got ko' by gallimore, has a draw with mark hernandez? and a split decision over jorge cota. he beat williams but that guy is pure glass. he went from tune up level opponent to top…

[QUOTE=ecuasionz;20782241]Too late. More than a handful are calling it a dive. Why dive when he was already skating on Bambi legs 2 of the last 7 rounds? Charlo broke him down. As long as the Charlos are Black American ,…

[QUOTE=just the facts;20782951]Korobov never fought ggg, but Derv did. So tell me, what's the basis for your anti Charlo agenda? Racism? Anti PBC? Pro ggg? What?[/QUOTE] Dude. Watch the fight again. Without sound. Especially those five rounds I mentioned. That's…

[QUOTE=just the facts;20782938]So what's the basis for your anti Charlo agenda? Racism? Anti PBC? Pro ggg? What?[/QUOTE] If I had an anti Charlo agenda then why would I, for example, say if anyone won the fight with Korobov, it was…