Jermall Charlo contends that a switch of opponents less than a week before his fight Saturday night hasn’t negatively affected him.

All that’s left now is for the WBC interim middleweight champion to prove it. Charlo and late replacement Matt Korobov both made weight Friday afternoon for their 12-round, 160-pound championship match, the main event of FOX’s tripleheader Saturday night from Barclays Center in Brooklyn. 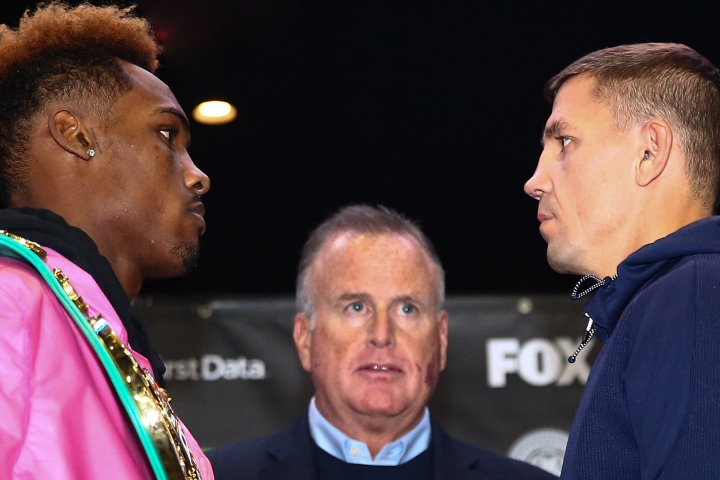 Korobov (28-1, 14 KOs) took this difficult fight on just six days’ notice. He replaced Willie Monroe Jr. (23-3, 6 KOs), of Rochester, New York, once Monroe tested positive for a “steroidal substance,” according to a statement released Monday by the Voluntary Anti-Doping Association.

The 35-year-old Korobov, of Lantana, Florida, was already training for a non-televised, eight-round fight on the Charlo-Monroe undercard against Colombia’s Juan DeAngel (21-9-1, 19 KOs). Korobov, like Monroe, is a southpaw.

Charlo (27-0, 21 KOs) will make the first defense of the WBC interim middleweight championship he won by knocking out Hugo Centeno Jr. (26-2, 14 KOs, 1 NC) in the second round April 21 at Barclays Center.

The two boxers scheduled to compete in the co-featured fight Saturday night made weight a few minutes earlier Friday afternoon.

Houston’s Jermell Charlo, 28, is consistently listed as a 12-1 favorite over Harrison, also 28.

Before Jermell Charlo and Harrison stepped on the scale, heavyweights Dominic Breazeale (19-1, 17 KOs) and Carlos Negron (20-1, 16 KOs) weighed in for their 10-rounder.

Numerous Internet sports books have listed the 6-feet-7 Breazeale as a 50-1 favorite over the 6-feet-6 Negron. Breazeale will risk his status as the mandatory challenger for WBC champion Deontay Wilder (40-0-1, 39 KOs) by boxing Negron, a 2008 Olympian.

The Breazeale-Negron encounter will be the first of three fights FOX will televise, starting at 8 p.m. ET/5 p.m. PT.

[QUOTE=PBR Streetgang;19375079]Probably so. Korobov is a little past his prime, has been inactive and has fought some pretty subpar competition since he was starched by Lee. I see Charlo feeling out Korobov early, in respect to his pedigree, and only…

[QUOTE=5000boxing;19374782]This should be a easy win for Charlo[/QUOTE] Probably so. Korobov is a little past his prime, has been inactive and has fought some pretty subpar competition since he was starched by Lee. I see Charlo feeling out Korobov early,…

This should be a easy win for Charlo