Super featherweight contender Jeremiah Nakathila added another victory to his resume last Friday in Namibia. The hard-hitting current WBO Africa titlist headlined a five-bout card at The Dome in the beautiful city of Swakopmund at the west coast of the country neighboring the Atlantic Ocean.

Nakathila (16-1, 12 KOs) wasted no time in success as he stopped Malawian Wilson Masamba in the fourth stanza of a scheduled 12-round title bout. The defending belt holder settled the pace of the fight early on, and, thanks to his well-placed power punches, controlled most of the action against his brave and willing opponent.

Nakathila, who is currently ranked No. 5 by the WBO at 130 pounds, increased his aggression in the third that helped him slow down Masamba (29-11-1, 10 KOs) and even dropped the Malawian after landing a massive right hook to the back of the ear in the closing seconds of the session. 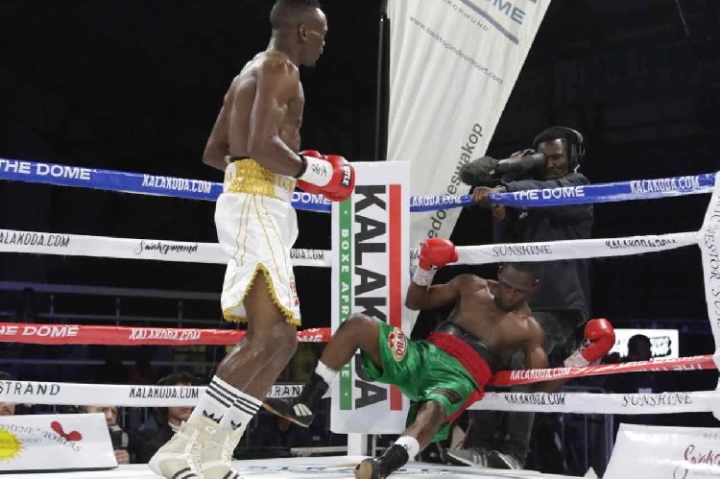 The Namibian quickly realized he is in no danger of his foe’s power that made him dominate the fourth as well until he landed his trademark straight right hand twice following easy left hooks that dropped Masamba heavily at a neutral corner. The latter got counted out by the referee while he was still sitting on the floor.

This matchup was the rematch of a late 2015 encounter between the two that also ended with Nakathila’s win, that time in the opening round. Friday’s was only the third knockout loss of Masamba’s career.

With the win, the Namibian contender, whose only defeat came in the form of a highly disputed majority decision in Russia against Evgeny Chuprakov in late 2016, is keeping his focus on an eventual world title fight 130 pounds, a future accomplishment Nakathila’s trainer and promoter, Nestor Tobias also pointed out.

“Our goal is to take Jeremiah to the world title and I will push him to become a mandatory challenger [by the WBO] as I know that he is the best junior lightweight fighter in the world. The sky is the limit for ‘Low Key’,” said Tobias to BoxingScene.com.

In one of two co-feature bouts for smaller titles, super featherweight Onesmus Nekundi won a close, split decision over Abraham Ndauendapo. Nekundi (9-5, 1 KO) started better, landing huge power punches from often awkward angles to bother his foe. Ndauendapo (16-7, 5 KOs), who was seemingly stronger but the less dangerous puncher of the two, came back into the fight once Nekundi started to fade. The participants fought on even terms in the closing frame.

The most bizarre moment of the bout happened to come from the judges, with two of them seeing action vastly different. In the end, two of the scorecards favored the busier Nekundi by 99-90, and 96-94 margins, while the third judge gave the verdict to Ndauendapo with 97-93.

Middleweight Lukas Ndafoluma ended matters in three full rounds in his bout against Ebenestus Kaangundue. The Windhoek-native settled the distance early on thanks to his large frame and well-timed jabs. In round three, Ndafoluma (12-1, 4 KOs) even scored a knockdown with his left jab, a punch that caused a late-reaction on Kaangundue (6-3, 1 KO). In the closing seconds of the frame, the former landed another jab that made Kaangundue bend forward in the center of the ring after the gong. The punishment caused resignation from further action on behalf of the 29-year-old fighter.

The guy who received the biggest ovation on the undercard happened to be Harry Simon Jr. The son of former junior middleweight as well as middleweight WBO world champion Harry Simon Sr handled business against Lukas Handivele. After a two-way action opening round, Simon dropped his foe in the second after a series of landed power punches.

The super lightweight prospect kept up the pace in round four and buzzed Handivele (1-4-1) with clean right hooks and uppercuts. The unbeaten pugilist even had enough energy left for a little showboating towards the fans before he kept beating his helpless foe until the referee stepped in to stop the carnage.

Simon Jr is a talented young fighter with the potential to follow in the footsteps of his father. To reach greatness, though, he needs to keep learning the trade, tighten his defense, work from a distance using his jab, and control the mind to keep concentrated on the task at hand.

On the kick-off bout of the evening, 115 pounder Fillemon Nghutenanye secured a hard-fought four-round decision win over Sakaria Nikodemus. The participants started fast, trading bombs with bad intentions. The more athletic Nghutenanye (2-0) controlled most of the action in the first two rounds but had conditional issues in the second half that helped Nikodemus (0-1) back into the fight. After four fast and well-fought rounds, judges had it 40-36, 39-37, 39-37 for Nghutenanye.

The event was put together by a trio of promoters in Nestor Tobias, Saul Loggenberg, and Steve Kalakoda. The whole card got broadcasted live on YouTube.