Paddy Gallagher seemed to have picked up his second win in seven weeks, only for an erroneous call to turn a stoppage win into a technical decision loss to Wales’ Chris Jenkins.

A cut over the left eye of Jenkins was deemed too severe to continue by the ringside physician, which forced the bout to go to the scorecards where the Welshman won 86-85 across the board Saturday evening on the road in Belfast, Northern Ireland.

Belfast’s Gallagher struggled throughout the first half of the contest, perhaps showing some of the ill effects of such a quick turnaround following a knockout win in town this past June. Jenkins boxed well in the first five rounds but couldn’t keep the momentum going. 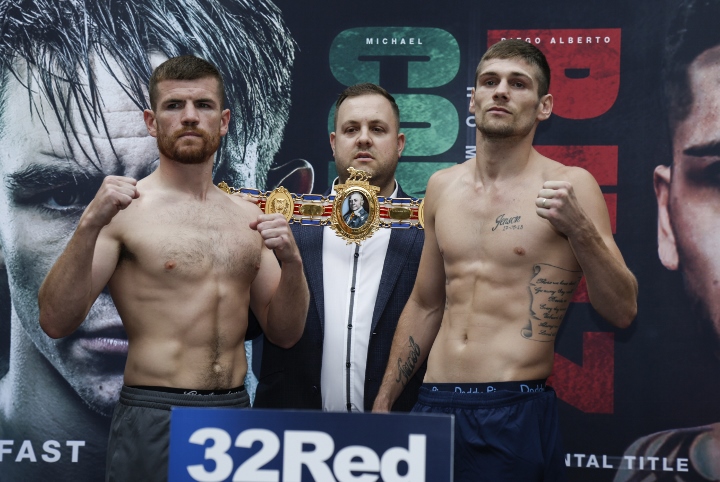 The tide turned for good in round six, with Gallagher controlling the action for much of the round and closing it out with the bout’s lone knockdown. A pair of left hooks to the body forced Jenkins to a knee, beating the eight count but spending much of the rest of the fight on the defensive.

A left hand by Gallagher in round eight opened up a deep cut over the left eye of Jenkins. Referee Howard John Foster took a look at the wound, which wasn’t severe enough at the time to cause concern but worsened with each landed punch.

By round nine, it opened up enough to where the ringside physician wasn’t comfortable allowing the fight to continue. It was believed at the time that it would produce Gallagher’s second win this summer after having claimed a 3rd round knockout in late June.

Confusion and controversy instead came of the moment, when the cut was ruled as the result of an accidental foul. It worked tremendously in Jenkins’ favor, despite having faded badly over the past four rounds and suffering a knockdown along the way.

Still, it was his early work which preserved the win on the final cards as he advances to 22-3-2 (9KOs). Gallagher falls to 16-6 (10KOs) with the controversial loss.

The bout served in supporting capacity to the celebrated homecoming of Belfast’s own Michael Conlan (11-0, 6KOs), a two-time Olympian and 2012 Bronze medalist who faces Argentina’s Diego Alberto Ruiz in the evening’s headliner.