Javier Martinez: Going To Show Time And Time Again Why I Was Deserving Of Olympic Spot

Javier Martinez is done waiting around for his dreams to come true.

The number-one ranked middleweight amateur boxer in the world did everything required of him to ensure his place on the 2020 United States Olympic Boxing team. Martinez ran the tables at the Olympic Trials, adding to his already lofty credentials including his status as a five-time national champion.

All that was left was to await the phone call that he would represent the U.S. as its middleweight candidate on the team due to compete in Tokyo. Instead what came was the latest in a 24-year life filled with letdowns.

“It felt like my soul left my body,” Martinez told BoxingScene.com upon learning the news that his role was limited to that of an Olympic alternate. 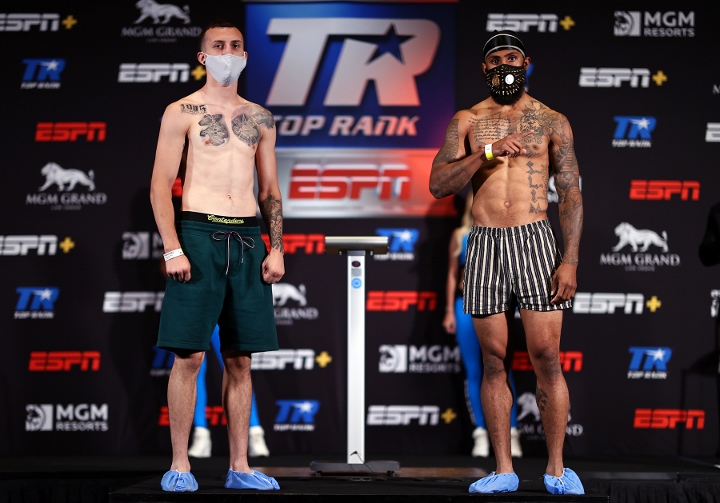 The same committee that decided the first generation Mexican-American from Milwaukee, Wisconsin still didn’t measure up to its revised selection process. They will now get a glimpse on an opportunity missed, as Martinez makes his pro debut Tuesday evening. The 6’1” middleweight will take on Jonathan Burrs in the opening bout of a Top Rank Boxing on ESPN telecast, live from MGM Grand Conference Center in Las Vegas.

The televised appearance marks the second attempt at a first pro fight for Martinez. A last-minute falling through of his previously scheduled opponent nixed his originally intended pro debut on a June 30 show in Vegas, where he now lives and trains.

For once, perhaps fate pointed him in the right direction as his placement on Tuesday’s card comes in dire need: two other fights were dropped from the show, both due to COVID testing including the original headliner between 130-pound titlist Jamel Herring and veteran challenger Jonathan Oquendo.

It’s a much-needed fortunate break after a childhood spent bearing witness to acts of violence—including literally dodging bullets as a four-year old. Like many, Martinez—whose parents emigrated from Guadalajara, Jalisco, Mexico—turned to boxing in search of a better way of life.

His motivation these days comes in the form of his seven-year old son, Lionel. The pro journey now comes with assistance from capable hands—Hall of Fame promoter Bob Arum and his Top Rank company, head trainer Jorge Capetillo and brilliant young manager Tim VanNewhouse of Split-T Management, who signed the boxer as part of a quartet of amateur standouts—including Kahshad Elliott, Dalis Kaleiopu and Marcus Valle—at that same time.

“Javier is the first to debut out of all of those terrific amateurs I was able to sign,” VanNewhouse informed BoxingScene.com. “This is the beginning to a big projected future for Javier and I’m excited for the opportunity he has tonight to showcase his talents to the world live on ESPN.

“I expect he will fulfill his potential and make his friends, family and new promoter proud.”

"Perhaps along the way, the young boxer can make a few others envious in realizing the talent they let slip through their fingertips.“Being a casualty of the new Olympic selection process just makes me that much more determined,” insists Martinez. “I am going to show, time and time again [in the pros] why I was deserving of that spot.”

Martinez is just one of the boxers that fell victim to the new double elimination tournament that made up the Olympic trials. You can beat everyone in your division and at the end of the day what does it matter…

Martinez has a lot of eyes on him kid looked like the real deal let’s see how he performs today.