When Jarret Hurd’s short left hook dropped southpaw Erislandy Lara with 37 seconds in their 154-pound title unification in April, his blow was the difference between losing and winning a split-decision that added Lara’s WBA, IBO crown to his IBF version.

But the screaming fans who packed the Hard Rock Hotel and Casino in Las Vegas were unaware of the pain shooting through Hurd’s left shoulder throughout the night from a torn rotator cuff he first noticed in February that required post-fight arthroscopic surgery and more than six weeks of physical therapy and rehabilitation.

“I never want to make any excuses. We both put up a good fight, I got the victory that night and became a unified champion. To me, this is something I already knew I had inside of me,” said Hurd, who endured a 30-minute operation at Washington, D.C.'s Howard University Hospital in June.

“I usually drop or knock people out with my right hand, so I displayed power in both hands and the will to dig deep no matter what. Fighting with a shoulder injury and still beating a guy like Erislandy Lara really shows what I can do when I will myself through it. I know there are fighters who would have pulled out, but I never ever doubted myself.” 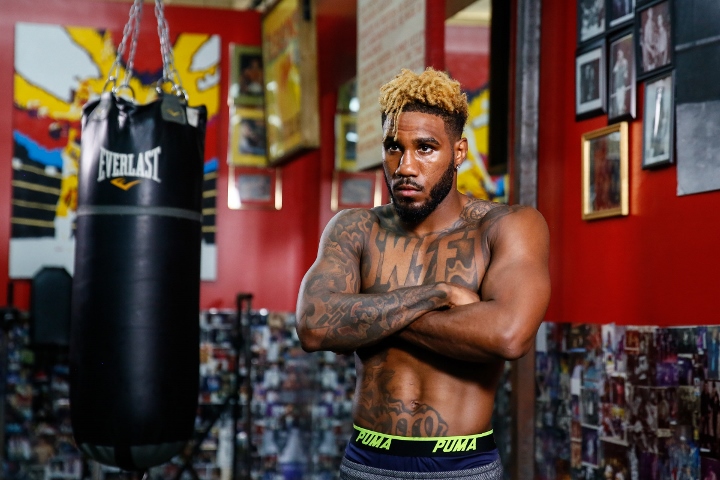 "Swift" Hurd (22-0, 15 KOs) will test his shoulder in pursuit of his third defense and eighth stoppage in nine fights against Jason Welborn (24-6, 7KOs) of England at The Staples Center in Los Angeles on Saturday’s undercard of Deontay Wilder’s heavyweight title defense against Tyson Fury.

Welborn, 32, drops in weight after vacating the British middleweight title he was due to defend against Mark Heffron (21-0, 17KOs) on the December 22 Carl Frampton-Josh Warrington undercard in Manchester, England.

Welborn has won five straight since losing back-to-back decisions to William Warburton and Craig Cunningham in May and July 2016, including a pair of split-decisions over Tommy Langford in May and September.

Armed with a 76 ½-inch reach, the 6-foot-1 Hurd has evolved into a sharpshooter and brawler with a powerfully proficient inside game. Hurd had stopped seven straight entering his clash with Lara,  the second defense of the crown he won in February 2017 by ninth-round TKO of Tony Harrison.

“Jason Welborn's a game opponent who vacated to fight for my two titles. Jason just lost his Mom, and I've sent my condolences," said Hurd, of Accokeek, Maryland.

"When a fighter has something to fight for like he does, I know he's going to come prepared and has nothing to lose. But I wanna display my height, range and especially test my left arm with my jab to make sure it's back."

Hurd overcame adversity in his previous bout against left-handed former champion Austin Trout in October 2017, fighting through a cut over his profusely bleeding left eye as a result of a sixth-round clash of heads to win by 10th-round TKO.

Trout was stopped for the first time in his career, having previously lost title-bout decisions to Lara (December 2013), Canelo Alvarez (April, 2013) and Jermall Charlo (May 2016).

"My best attributes are not my jab, reach, size or right hand, but my composure in finding ways to win,”  said Hurd, 28. “Whatever happens, I know how to remain calm. I can take a shot and not show any effects, which breaks my opponents, mentally."

"Jarrett's naturally calm in the ring, staying relaxed, which conserves of energy. He definitely gets stronger as the fight goes on. When the opponent weakens, we step on the gas and start the breakdown process, landing solid shots and going to the body when your opponent wants a breather in the later rounds."

“Jarrett’s left hand is still very strong, so you’re going a good jab and boxing skills. I expect Jarrett to break down Jason Welborn and to stop him in around the eighth or ninth,” said Rodriguez.

“Then we wanna fight Jermell Charlo. Jarrett likes guys to come forward, and Charlo’s more of a come-forward fighter. Charlo is going to get knocked out in the later rounds when we fight him."

[QUOTE=gntsfan84;19300762]Wonder if they could do something rarely done and put Hurd vs Charlo as the co-main for Spence vs Garcia.[/QUOTE] That would be nice asf!!!!

Wonder if they could do something rarely done and put Hurd vs Charlo as the co-main for Spence vs Garcia.

[QUOTE=Andre_parker1;19300396]word that the charlo's missed vada testing didn't make it to boxingscene..I wonder why? haymon'$ influence maybe[/QUOTE] Check your source..This site would love to jump on that title if it were true & so would espn….

[QUOTE=Ray*;19300517]If you look at PBC recent blueprint then you can see the possibility of this fight ending up on PPV.[/QUOTE] Not really. Hurd nor Charlo are anywhere near the level of Wilder/Broner/Pacquiao or even Spence/Garcia. Again, these guys haven't even…