Jarrell Miller: I'll Impose Will On Dinu & Get Him Out Of There

Not with Dinu’s aggression against pedestrian opposition. Not with his unblemished record (18-0, 14 KOs). And not with the unbeaten Romanian’s eight-fight knockout streak.

“He’s never been in there with any guy close to what I bring to the table,” Miller told BoxingScene.com. “He has a good record, but the guys that he’s fought weren’t so great. You know, he’s ranked up there in the division. The main thing is just getting in there and doing what I’ve gotta do. I don’t care about what he’s done or what he’s gonna do. I’m gonna impose my will and get him out of there.” 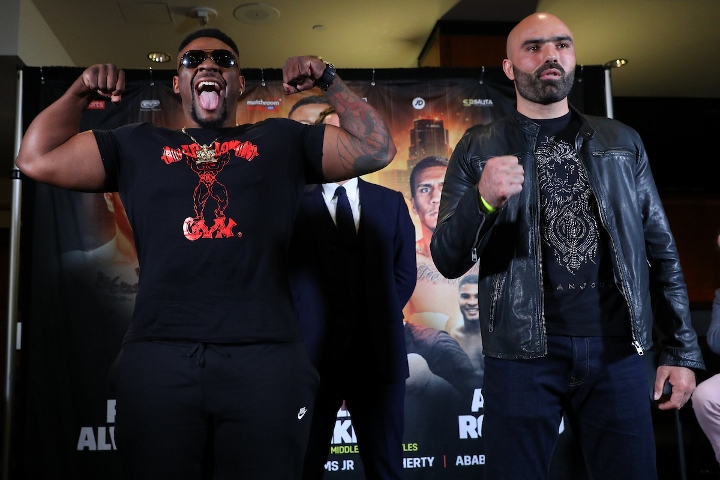 His 12-round heavyweight fight against Dinu on Saturday night will mark Miller’s second fight in just six weeks. His second-round knockout of faded contender Tomasz Adamek (53-6, 31 KOs) on October 6 in Chicago allowed for an unusually quick return.

The 30-year-old Miller (22-0-1, 19 KOs) is thankful for the work, but their DAZN main event at Kansas Star Arena in Mulvane, Kansas, won’t be the title fight Miller expected. The WBA hasn’t stripped Manuel Charr of its world heavyweight title, thus it can’t sanction Miller-Dinu as a fight for that championship (https://www.boxingscene.com/wba-strip-charr-miller-dinu-unlikely-title-fight--133710).

In Dinu, Miller will encounter a 6-feet-5, 240-pound opponent confident following his experiences as a sparring partner for unbeaten IBF/IBO/WBA/WBO champion Anthony Joshua (22-0, 21 KOs). Brooklyn’s Miller promised to beat that belief out of a 32-year-old opponent who’ll fight a ranked heavyweight for the first time in his 10 years as a pro.

“He tries to be aggressive with guys that are trying to survive,” Miller said. “A lot of the guys he’s fought were survivors. So he’s really aggressive in a lot of his fights that I’ve seen. But he’s never fought anybody that really wanted to be the aggressor in the fight. It looks like he’s a little bit taller than me, about like a quarter of an inch, really light, not a heavy puncher. But the thing is that when you fight somebody that comes forward and throws punches, and throws bombs and punches like my damn self, it’s a whole different fight. I’ve not really seen him back up in a fight. His thing is about coming forward. Nobody backs up ‘Big Baby’ – period.

“Everybody I’ve hurt tried to move against me. Gerald Washington was gonna bring the fight to me, and that wasn’t gonna happen. By the end of the first round, he was running for his life. Mariusz Wach, tall guy, tried to use the jab to bother me, running for his life. We had Johann Duhaupas, beat him up for 12 rounds. Couldn’t move away, couldn’t get away from me, beat him up. We had Tomasz Adamek, who had some of the best footwork and could move and do all this and all that, and you seen how that fight went. Like I said before, pressure busts pipes, and you can run but for so long. You’ve gotta sit there and fight.”

[QUOTE=JakeTheBoxer;19279089]Povetkin destroyed Duhaupas inside 6 rounds.[/QUOTE] Hahaha... Duhaupas took the fight on a day notice. He was on holidays with his wife for f**k sakes. Povetkin failed a drug test & needed an opponent knowing Stiverne would walk & they…