The confident contender is determined to defeat Duhaupas quicker and more impressively than Deontay Wilder did when they meet April 28 at Brooklyn’s Barclays Center. Wilder stopped a battered, bloodied Duhaupas in the 11th round of his second defense of the WBC heavyweight title in September 2015. 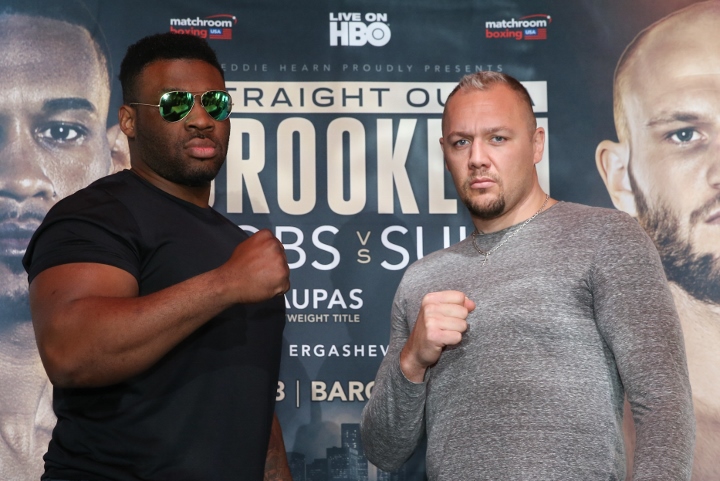 Brooklyn’s Miller (20-0-1, 18 KOs) drew criticism for his performance against Poland’s Wach (33-3, 17 KOs), even though Miller became just the second opponent to stop Wach. Miller won their November 11 bout by ninth-round technical knockout, with Wach still on his feet.

The 6-feet-4, 283-pound Miller realizes Duhaupas won’t go away without a fight.

In 41 professional fights, only Wilder (39-0, 38 KOs) and former WBA champ Alexander Povetkin (32-1, 23 KOs) have defeated Duhaupas inside the distance. The 37-year-old Duhaupas (37-4, 24 KOs) took the Povetkin fight on approximately 24 hours’ notice in December 2016 and was brutally knocked out late in the sixth round.

“He’s a durable guy,” Miller said of his 6-feet-5, 250-pound opponent. “You’ve gotta understand, Deontay Wilder is wild. He doesn’t have boxing fundamentals. He doesn’t know how to throw a stiff jab, a jab to the body, body shots, go up the middle, how to just beat up a guy. So he kind of jumped on Duhaupas a little bit, hurt him in the beginning. But then he kind of took his foot off the gas and Duhaupas got his confidence and came back a little bit.

“But I’m a totally different fighter. I can box, I can move and I’ve got good footwork, good handwork, speed, the whole nine. So my main thing is taking him apart, beat him up and get him out of there.”

HBO will air Miller-Duhaupas as the opener of a “World Championship Boxing” doubleheader. Brooklyn’s Daniel Jacobs (33-2, 29 KOs) will oppose Poland’s Maciej Sulecki (26-0, 10 KOs) in the main event, a 12-round middleweight match.

[QUOTE=Eff Pandas;18520747]The result is the result. Duhaupas took the fight. If "he wasn't ready" he shouldn't have fought. Mainly I'm just saying this is some bs motivation tactic & headline sh^t & if Big Baby KO's him in 20 seconds…

[QUOTE=sotgoda;18521348]They will always ignore the fact that Wilder was just getting back from two major hand surgeries and a 3rd-degree burn. Further, Wilder switched opponents less than a month before. the 1st reason I raised is probably why Wilder was…