NEW YORK – Jarrell Miller backed up all of his trash talk Saturday night.

The huge heavyweight stopped contender Gerald Washington after eight rounds in a heavyweight fight that was part of the Adrien Broner-Mikey Garcia undercard at Barclays Center in Brooklyn.

The 6-feet-4, 298-pound Miller threw a lot of punches in the fight for a man his size and eventually wore down Washington. The 6-feet-6, 248-pound Washington tried to use his jab to keep Miller from landing against him, but Brooklyn’s Miller mostly walked through it and Washington wasn’t able to hurt him. 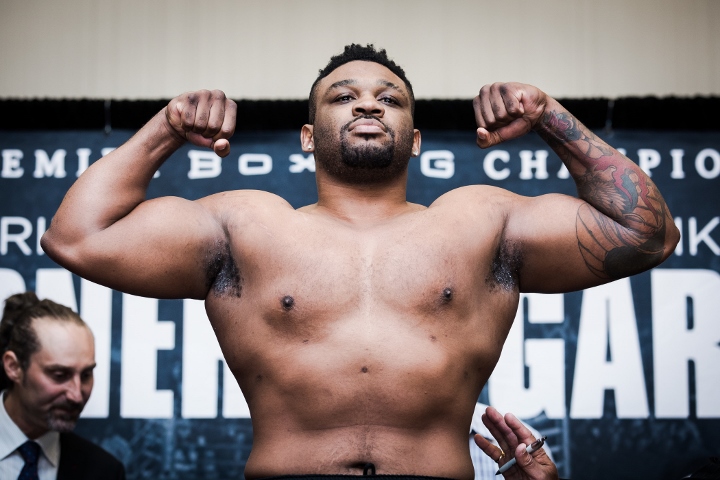 Washington was exhausted following the eighth round, which prompted his trainer, John Pullman, to tell referee Gary Rosato to stop the fight.

Washington was down in the fight, but unloaded a barrage of power punches to Miller’s head to start the sixth round. Many of those punches connected cleanly, but an unfazed Miller shook his head and kept coming forward.

Washington needed a breather after throwing so many punches to start the sixth round, which enabled Miller to come back in the second half of that round. With Washington backed into a neutral corner, Miller drilled Washington with his own array of power punches just before the sixth round ended.

Miller rocked Washington with a right uppercut with about 40 seconds to go in the fifth round. He followed that up with a straight right hand, but Washington wouldn’t go down.

Miller landed several solid right hands within the first minute of the fourth round, but Washington shook his head to let Miller know he wasn’t hurt.

Washington used his jab to keep Miller off of him for much of the first round. Washington was the busier fighter for those three minutes, but Miller finally connected with a straight right hand just before the first round ended.

Washington, 35, turned to boxing after his NFL career didn’t pan out. Five months before Miller beat him, Washington was stopped in the fifth round by WBC heavyweight champion Deontay Wilder (38-0, 37 KOs) on February 25 in Birmingham, Alabama.

Miller simply overwhelmed Washington in this fight. He pushed him back to the ropes constantly & walked through everything Washington threw. He was busy throwing combinations & mixed up his attack. I was surprised by his activity level as I…

You guys are seriously underestimating Miller. The big boy can move and he's a lot faster than he appears. I want to see how he does against Iron chinned Dominic Brazeale

[QUOTE=KillaCamNZ;17905630]Yeah, sure. But you're not the first person to share their opinion despite having nothing to base it on, and you won't be the last. So this is where it ends, really. Everyone wins![/QUOTE] What the hell has Parker done…

[QUOTE=Pan-Africanist;17903435]You have a problem with my assessment?[/QUOTE] Yeah, sure. But you're not the first person to share their opinion despite having nothing to base it on, and you won't be the last. So this is where it ends, really. Everyone…

I'm not impressed by Miller at all. Slow, no movement, and have doubts about his power. If Wilder doesn't fight Ortiz, put him with Big Baby in the fall.