Jaron Ennis transformed himself from prospect to a legitimate 147-pound contender.

The switch-hitting Ennis displayed speed, double-fisted power and killer instinct by scoring three knockdowns in the second round of his 12th straight knockout against veteran welterweight Raymond Serrano before his screaming, partisan, hometown Philadelphia fans on Friday night at the 2300 Arena in Philadelphia, ending a scheduled 10-round main event on ShoBox: The New Generation on Showtime.

In succession, the 21-year-old Ennis (22-0, 20 KOs) floored his man with a right hook out of the southpaw stance, right hand while orthodox, and, finally, with a hybrid-uppercut, right hand along the ropes. 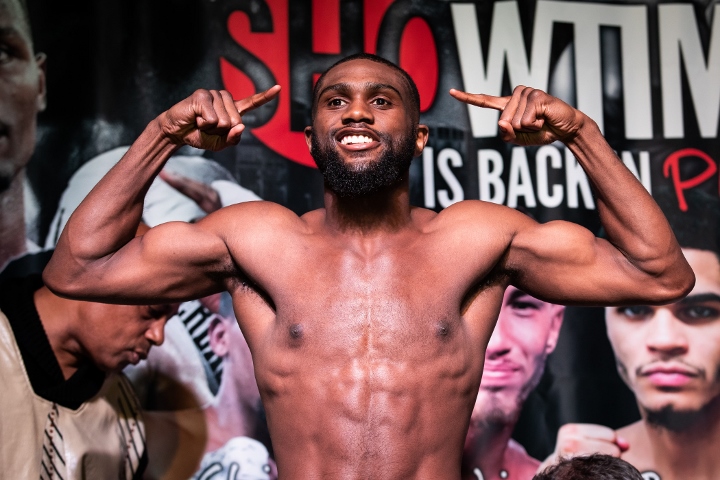 It was yet another impressive performance for the title-shot-seekingEnnnis, who out-landedSeranno, 13-0, in jabs, and 31-4 in power shots. Serrano (24-6, 10KOs) was stopped for the third time in his career, his previous losses were against fighters with a combined record of 89-1-1.

In the co-main event, “Tsumani” Samuel Teah (15-2-1, 7 KOs) hurt Kenneth Sims Jr. (13-2-1, 4 KOs) with left-right combinations in the second and fourth and nearly finished him at the bell ending the sixth of an eight-round unanimous decision.

In the opening bout, Ukrainian Arnold Khegai overcame a bleeding, third-round head-butt induced slit over his left eye and scored a sixth-round knockdown during an eight-round unanimous decision  over Jorge Diaz.

In his second fight on American soil in as many appearances at Philadelphia’s 2300 Arena,  the 26-year-old “Arni” Khegai (14-0-1, 9 KOs) hammered Diaz (19-6-1, 10 KOs) of New Brunswick, New Jersey on the ropes over the final 13 seconds but couldn’t register his second straight knockout.

[QUOTE=BigZ44;19277935]2nd KD was reminiscent of Danny Garcia/Brandon Rios[/QUOTE] Pinpoint! I thought the same exact thing! Only difference was Serrano bent from the knees before collapsing. And Rios was bent from the neck. Comparing, DGarcia's shot was the more brutal one.…

Ennis got to step it up. If his chin and stamina proves real in the future he is going to be a handful for any of the top guys. Great to see this generation of fighters going to the body…

[QUOTE=KTFOKING;19278689]Haney's pops is too smart not to sign with Floyd. Him having a promotional company at the age of 19 or 20 is insane. But Hearn had the war chest of cash where he could have offered Haney a deal…

[QUOTE=Bronx2245;19278442]Why hasn't Floyd signed Haney? That's the million dollar question! Kid trains with your father, in your gym! Tank's first fight @ 135 should be vs. Haney, and Floyd should be promoting that ASAP![/QUOTE] Haney's pops is too smart not…